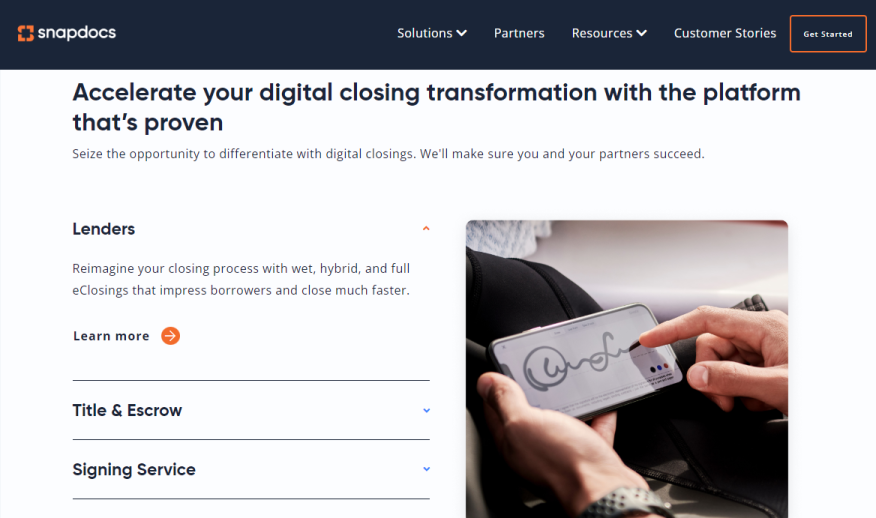 The digital closing platform for the mortgage industry first announced its eVault in October 2021, describing it as a solution for the secure creation, storage, and transfer of eNotes and other digital mortgage documents. The eVault is directly connected into the Snapdocs Digital Closing Platform, expanding its eVault integration suite to include a natively developed option.

Alyssa North, senior vice president of operation for PRMI, said eNotes are “a win-win for PRMI and our valued borrowers. We’re dedicated to advancing the adoption of digital closings and making eNote the default whenever possible.”

North described Snapdocs as a trusted partner “in scaling eNotes and furthering our digital closing strategy. The unique combination of best-in-class technology and deep industry knowledge Snapdocs provides is why we chose to partner with Snapdocs on this eVault initiative.”

PRMI joined several other mortgage lenders in implementing Snapdocs eVault to deliver the significant benefits that eNotes offer to their organizations and their consumers. It selected Snapdocs earlier this year after working with a different provider that was unable to meet its scalability expectations. It subsequently rolled out digital closings with eNotes using Snapdocs eVault across its 250 branches in 49 states in just four months, the lender said.

So far, PRMI added, it has seen a four-day reduction in dwell time for mortgages closed as eNotes, leading to a savings of more than $250 per loan.

“From the beginning, we’ve had the utmost confidence and trust in Snapdocs,” North said. “They realize that technology alone doesn’t solve problems and have taken the time to understand the challenges and nuances of our business — and how all of that informs our overall digital transformation.”

North added that the partnership “has already manifested itself in our early eNote successes, and we expect that to only grow over time.”

The Snapdocs eVault is built for loan originators and secondary market participants to scale eNote adoption, the company said. With the addition of an eVault to its suite of digital mortgage products, Snapdocs provides a single platform to securely generate, execute, store, and transfer copies of eNotes and other electronic mortgage documents.

Snapdocs automatically stores the eNote in the secure eVault, registers the eNote with the MERS eRegistry, and allows instant delivery to all secondary market participants, including investors, warehouse lenders, servicers, and document custodians.The Snapdocs eVault is also compliant with MISMO eVault Standards, and has completed certification with Freddie Mac and Fannie Mae.

“When we looked at the value eNotes offer relative to adoption, we realized there were gaps in the decades-old eVault solutions preventing lenders — and the industry at large — from getting to scale,” said Aaron King, Snapdocs’ CEO. “Leveraging feedback from PRMI and other customers, we’ve developed the Snapdocs eVault to address the pain points holding our industry back.”

King said Snapdocs has combined its “best-in-class technology with unmatched support to ensure customers experience successful implementations and widespread adoption. This offering is another step in building the infrastructure to make digital mortgage transactions faster, more reliable, and more accessible for all mortgage participants.”