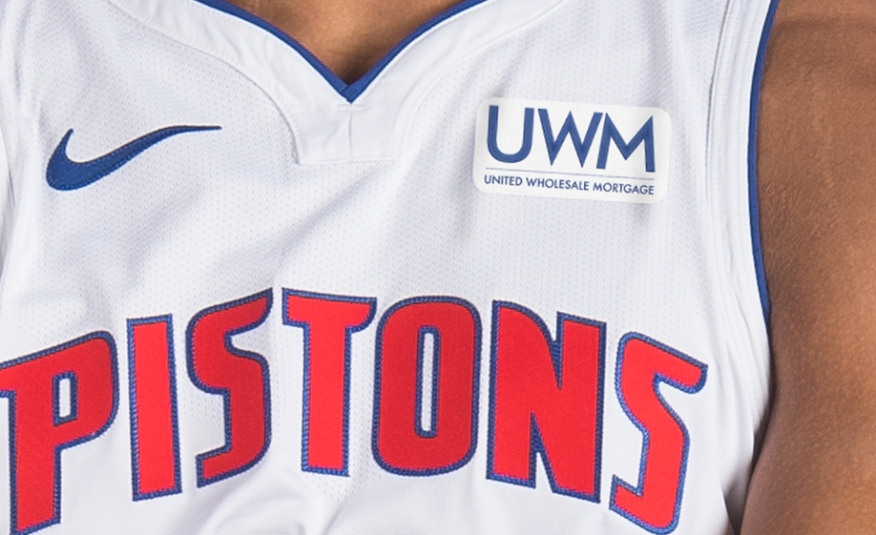 Pistons vice chairman Arn Tellem lauded that the jersey partnership with UWM goes well beyond just a typical jersey sponsorship by honoring those giving back to our community and growing the game with activations tailored to youth.

“Our relationship with UWM will provide the opportunity to engage fans in a variety of ways by collaborating on off the court on initiatives that honor those who serve and drive youth participation and excitement through basketball,” said Detroit Pistons Vice Chairman Arn Tellem.

“UWM has been embedded in metro Detroit for over 35 years. Our company culture and success has multiple ties to basketball and a team working together towards a common goal,” said UWM CEO Ishbia. “From my time playing basketball for Tom Izzo at Michigan State to the way we use sports terminology, teamwork mentality and relentless pursuit to improve ourselves each day we are very aligned with the Pistons organization.”

UWM will have its logo prominently featured on the left front strap of official Detroit Pistons team jerseys beginning with the start of the 2021-22 NBA season. The jersey partnership will help the wholesale mortgage provider reach new local and national fans who follow the NBA and the Detroit Pistons, according to a press release. United Wholesale Mortgage will be showcased to the millions of Detroit Pistons social media followers as well as viewers and listeners throughout the State of Michigan on Bally Sports Detroit, 97.1 FM The Ticket and the Pistons Radio Network.

The brand will receive worldwide exposure through the league’s national and international television and streaming partners. Other elements of the partnership include television and radio broadcast advertisements and features, rotational banner placement on Pistons.com as well as courtside rotational signage and basket station digital signage inside Little Caesars Arena.

Ishbia added, “As the No. 2 overall mortgage lender in America we intend to leverage this partnership with the Pistons and NBA to catapult national awareness of not only UWM, but mortgage brokers across the country.”

Unique to other jersey partner deals, United Wholesale Mortgage will be designated as a supporting partner of the Detroit Pistons “Hoops For Troops” community relations platform that includes on-court recognition of a selected “Military Hero of the Game” at 10 regular-season home games and presence at the club’s annual veterans job fair. UWM will also be designated as presenting sponsor of “Home on Sundays” game nights that will take place during each Sunday regular-season game.

With the two companies focused on making an impact by serving local youth, United Wholesale Mortgage will serve as presenting sponsor for the club’s honorary ball kid promotion during each home game and be designated as the title sponsor for the organization’s summer 3-on-3 tournament. Debuting in 2019, the annual event brings together teams of people from across the state.