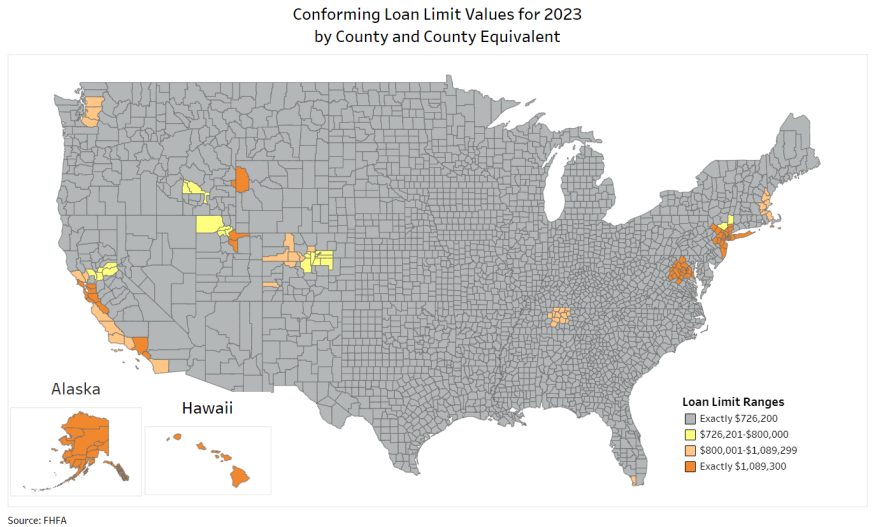 With home prices nationwide rising for a record 128 consecutive months, it’s no surprise the federal government will raise the limits for loans it will back by 12% in 2023.

What may shock some about the new conforming loan limit (CLL) values for mortgages to be acquired by Fannie Mae and Freddie Mac is that, for high-cost areas, the limit next year will exceed $1 million.

According to the FHFA, the Housing and Economic Recovery Act (HERA) requires the baseline CLL for the government-sponsored enterprises (GSEs) to be adjusted each year to reflect the change in the average U.S. home price.

FHFA also published its third quarter 2022 FHFA House Price Index report on Tuesday, which showed that house prices on average increased 12.21% between the third quarters of 2021 and 2022. The baseline CLL in 2023 will increase by the same percentage.​

FHFA noted that special statutory provisions establish different loan limits for Alaska, Hawaii, Guam, and the U.S. Virgin Islands. In those areas, the baseline loan limit will also be $1,089,300 for one-unit properties.

Due to rising home values, the conforming loan limits will be higher in all but two U.S. counties or county equivalents., the FHFA said.

Earlier this month, the National Association of Realtors reported the median existing-home price for all housing types in October was $379,100,up 6.6% from October 2021 ($355,700), as prices rose in all regions. It marked 128 consecutive months — or 10.6 years — of year-over-year increases, the longest-running streak on record.