DocMagic Uses Tesla to Take eSigning on the Road 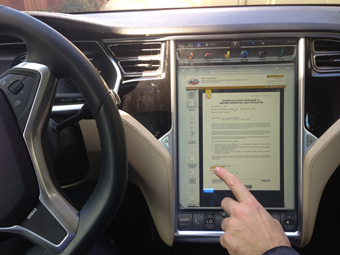 DocMagic, Inc. has taken the all electronic mortgage lending process to a whole new level by completing the first ever electronic document eSigning from a remote location while in motion. The firm recently completed, and memorialized on video, the eSigning of an IRS 4506-T from inside a moving Tesla automobile, using the car’s own 17” touchscreen. “One of the promises of eServices is that it will allow us to do business with our borrowers anywhere, anytime. This demonstration proves that we have reached that goal,” said Dominic Iannitti, CEO of DocMagic. “DocMagic has taken innovation beyond the whiteboard and put it to the test on the streets of America and that test was a complete success.” The transaction was conducted using the car’s onboard computer while the vehicle was in motion near DocMagic’s headquarters in Torrance, Calif. This is just one example of how thousands of consumers are using mobile technologies today to do every kind of business, from banking to shopping. In response to that growing trend, DocMagic launched BorrowerMobile earlier this year, an interactive mobile app that turns any tablet or smartphone, including the one built into the Tesla, into a seamless communication tool for borrowers and lenders. BorrowerMobile leverages DocMagic’s eSign process, the fastest, easiest and most secure way to get documents signed. Borrowers can review and eSign loan documents and disclosures, attach any required trailing documents, or provide additional information instantly. Lenders can increase productivity, protect data integrity, and stay on top of loan document status, working more efficiently than ever before. “This is one more example of how DocMagic will innovate where others will wait,” Iannitti said. “Conducting the first successful electronic signing on a truly mobile platform (while in motion!) demonstrates that DocMagic customers are ready to go wherever the future takes us.”
Link copied
Published
Nov 01, 2013
Coming Up See All
Nov
10
Motor City Mortgage Expo
Detroit, MI
Nov
18
Texas Mortgage Roundup – Houston
Houston, TX
Dec
09
California Mortgage Expo – Irvine
Irvine, CA
Get the Daily
Advertisement
Advertisement
Industry News
Guild Mortgage Announces Medical Professional Mortgage Program