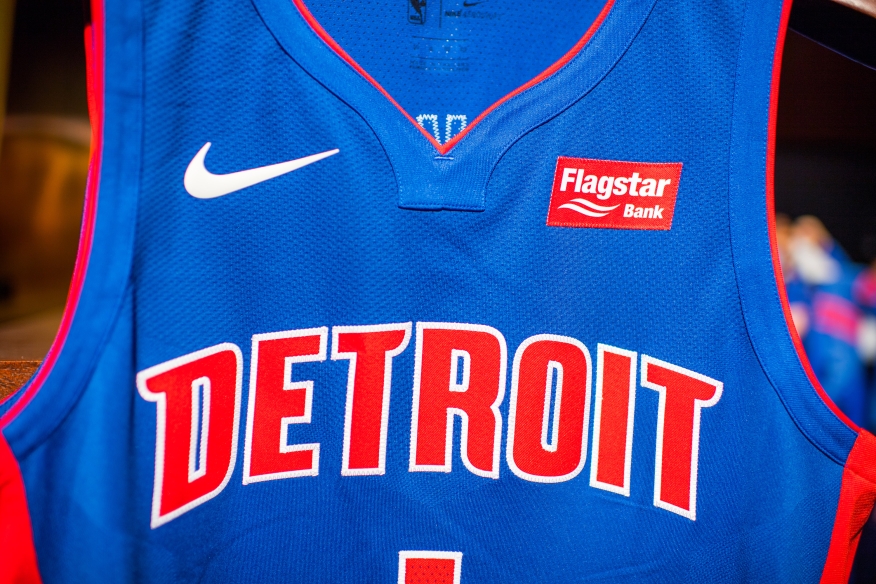 The Detroit Pistons of the National Basketball Association (NBA) and Flagstar Bank have announced a multi-year corporate partnership deal that brands Flagstar Bank as the franchise’s first-ever jersey partner. The deal also designates Flagstar as the official banking and mortgage sponsor of the Detroit Pistons. Detroit becomes the tenth NBA team to announce a jersey partner. Additional aspects of the partnership deal include in-arena digital and static signage throughout the venue as well as social, television and radio advertising.
“This is a dynamic partnership between two organizations committed to building a better Detroit,” said Pistons Owner Tom Gores. “Beyond putting the Flagstar name on our Pistons jerseys, we will be partnering on an education initiative that will benefit schoolchildren in Detroit. I’m really proud that this is more than just a business and marketing initiative. It’s about working together to support the revitalization of our city.”
Flagstar Bank President and CEO Alessandro DiNello said, “Like the Pistons, Flagstar is a community-focused Michigan organization committed to instilling pride in our region and contributing to its vitality. At Flagstar, we have a 30-year history of community involvement and investment. We’re pleased to partner with the Pistons to bring good things to the community we share.”
Flagstar Bank will have their logo prominently featured on the left front strap of official Detroit Pistons team jerseys at the start of the 2017-18 NBA season. Flagstar Bank will be showcased to a base of more than 3.2 million Detroit Pistons’ social media followers, as well as viewers and listeners throughout the State of Michigan on Fox Sports Detroit, 97.1 FM The Ticket and the Pistons Radio Network.
“Thanks to the brand exposure with the Pistons, we will have an unmatched opportunity to tell the story of Flagstar’s transformation to a full-service community bank with a thriving commercial business,” DiNello said. “And the chance to share crafted solutions Flagstar customers love with Pistons fans through co-branded credit and debit cards and checking accounts built just for them, is truly exciting.”
Unique to other jersey partner deals, Flagstar Bank will be designated as the presenting sponsor of the Detroit Pistons Math Hoops community relations platform. As two companies focused on making an impact by serving local youth, the Pistons and Flagstar are reaching out to students throughout metro Detroit and the region with this fast-paced basketball board game, curriculum, and academic program. Math Hoops helps students learn fundamental math skills through direct engagement with the real statistics of their favorite NBA players. The program is currently in place at 40 local schools throughout the region with vast room for growth. In the first year of Flagstar’s sponsorship of Math Hoops, two Detroit-area students were runners-up in the national championship.
Link copied
Coming Up See All
Jun
22
Chicago Mortgage Originators Expo
Countryside, IL
Jul
06
Ultimate Mortgage Expo
New Orleans, LA
Jul
13
Carolinas Connect Mortgage Expo
Charlotte, NC
Get the Daily
Advertisement
Advertisement
Industry News
CFPB New Rule Prevents Predatory Lending To Military Service Members

The Most Effective and Tested Digital Tactics for Loan Officers

Sales and Marketing
May 29, 2021
Stop Networking

It’s time to rethink your approach to building connections.