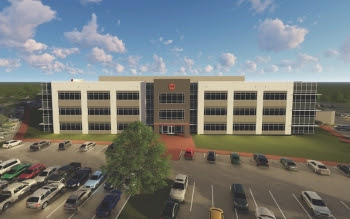 Movement Mortgage has broken ground on a second building at its home base in Fort Mill, S.C., a move that will double the size of its National Sales Support Center. The company is investing $18 million to construct the new three-story, 90,000-square-foot building, expected to open in January 2019.
The building will stand on the same plot of land as the current headquarters, and house departments that include a larger information technology team, the retail sales support team and the company’s affiliates, such as Movement Insurance. Among its amenities will be a larger gym, a cafe and a courtyard between the first building and the new one.
This latest expansion aligns with Movement’s goal to scale its operations, serve more borrowers and add more than 700 new employees to its headquarters workforce over the next five years. It also demonstrates the company’s commitment to bringing more jobs to Lancaster County.
“Relationships matter and proximity matters. When we get team members face-to-face at the same location, we see exponential productivity,” Movement Mortgage Chief Executive Officer Casey Crawford said. “Despite a contracting mortgage market, we’ve continued to take market share across the United States and we plan on continuing to grow in 2018 and well into the future. We want as many team members together in Fort Mill as possible to continue the great work that we’re doing.”
Founded in 2008 with just four employees, Movement has grown tremendously in its nine years. Today, it employs more than 4,300 people across licensed operations in 47 states. More than 800 of those employees work in its Fort Mill headquarters. A new building is key to enhancing operations and performance as those numbers increase.
“This just shows our continued commitment to growth,” Crawford said. “We’re in this for the long-term. This new building is another stake in the ground that cements our vision to keep gaining market share, to keep innovating and to keep serving borrowers with love and integrity.”
Link copied
Published
Dec 26, 2017
Coming Up See All
Aug
03
New York Mortgage Expo
Suffern, NY
Aug
10
OriginatorTech
Virtual
•
11:40 AM ET
Aug
12
California Mortgage Expo – San Diego
San Diego, CA
Get the Daily
Advertisement
Advertisement
Industry News
FormFree Enters Deal To Offer Products to Lenders One Members