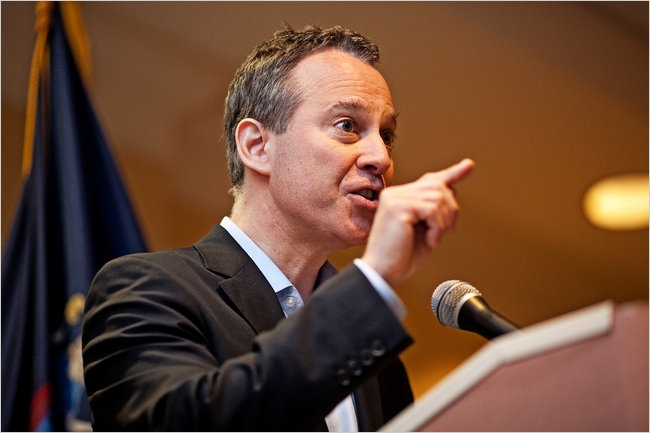 Eric Schneiderman, New York’s attorney general and one of the most visible state-level critics of the financial services industry, resigned after being publicly accused of nonconsensual physical violence—including assaults to the face and choking—by four women with whom he had engaged in sexual relationships.
According to an investigative article published in The New Yorker by Jane Mayer and Ronan Farrow, Schneiderman is accused by two of the women of striking them with such force that they required medical treatment, while a third woman was left with a red mark on her face after being slapped by Schneiderman. One woman, a Sri Lankan national, claimed Schneiderman referred to her as his “brown slave,” and all of the women stated Schneiderman’s violent behavior was fueled by heavy drinking.
Two of the four women agreed to be identified in the article: Writer and filmmaker Tanya Selvaratnam and political blogger and activist Michelle Manning Barish. The other two women opted not to be publicly identified for fear of reprisals, but Mayer and Farrow said they confirmed their respective stories through vetting and examining photographic evidence.
Schneiderman, who is a divorced father of a 24-year-old daughter, initially issued a statement that denied the article’s charges. “In the privacy of intimate relationships, I have engaged in role-playing and other consensual sexual activity,” he said. “I have not assaulted anyone. I have never engaged in nonconsensual sex, which is a line I would not cross.”
However, Schneiderman announced his resignation approximately three hours after The New Yorker article appeared online. In a statement, Schneiderman announced, “It’s been my great honor and privilege to serve as attorney general for the people of the State of New York. In the last several hours, serious allegations, which I strongly contest, have been made against me. While these allegations are unrelated to my professional conduct or the operations of the office, they will effectively prevent me from leading the office’s work at this critical time. I therefore resign my office, effective at the close of business on May 8, 2018."
Within the financial services industry, Schneiderman is known for his aggressive litigation against lenders and servicers, most recently in March when he reached a $500 million settlement with Royal Bank of Scotland related to charges of the financial institution’s practices and misrepresentations to investors regarding residential mortgage-backed securities that were issued prior to the 2008 economic crash. He has also been a vocal critic of the Consumer Financial Protection Bureau under Mick Mulvaney’s leadership, demanding Mulvaney’s ouster less than a month after his presidential appointment and warning against potential weakening of the bureau’s investigative and enforcement activities.
Shortly after The New Yorker article appeared, New York Gov. Andrew Cuomo issued a statement announcing that a New York District Attorney probe into Schneiderman would commence. Cuomo added, "I do not believe it is possible for Eric Schneiderman to continue to serve as attorney general, and for the good of the office, he should resign."
Link copied
Published
May 07, 2018
Coming Up See All
Aug
18
Maximum Acceleration
Las Vegas, NV
Aug
19
Originator Connect
Las Vegas, NV
Aug
19
Non-QM Summit
Las Vegas, NV
Get the Daily
Advertisement
Advertisement
Analysis and Data
Mortgage Debt Rose 14% From 2017-2021: Experian