Home Equity and Flipping Profits Up, Rates and Lender Profits Down 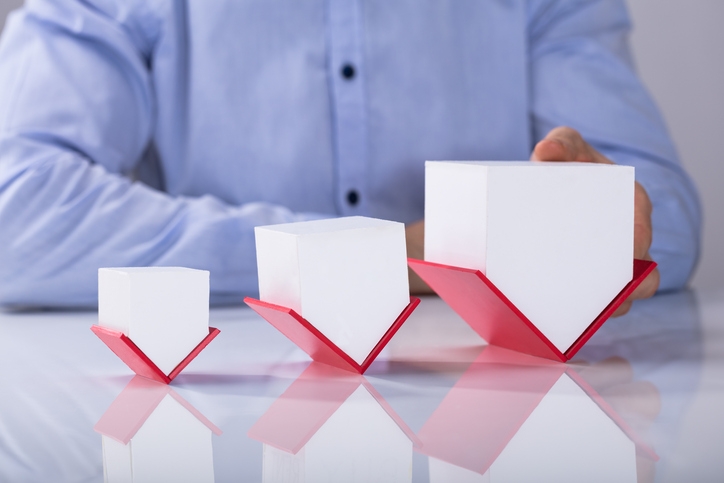 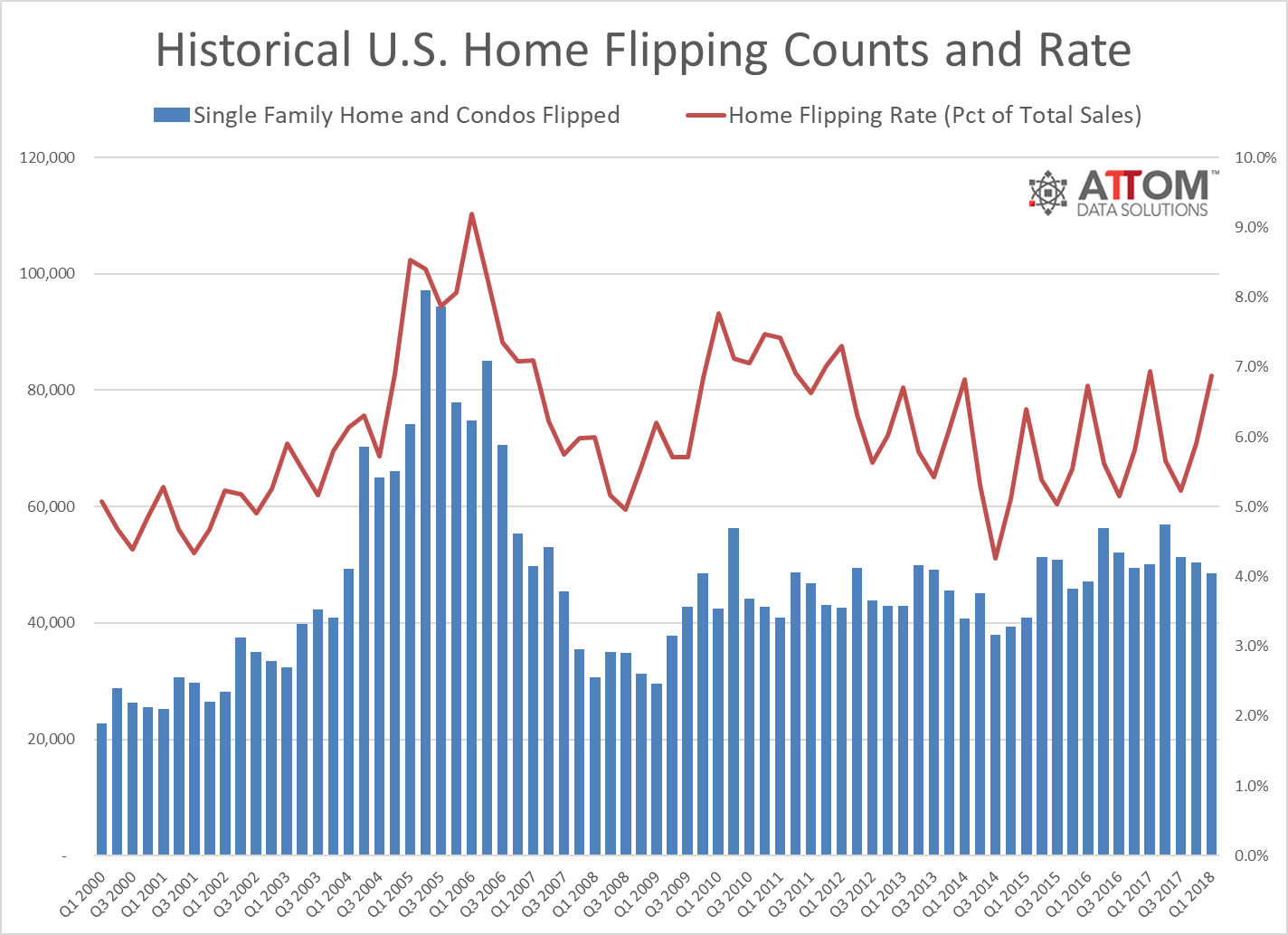 Homes that were flipped in the first quarter sold at an average gross profit of $69,500, up from an average gross flipping profit of $68,250 in the previous quarter and up from $66,287 one year earlier. The first quarter saw the highest average gross flipping profit since ATTOM began tracking in the first quarter of 2000.
Despite these new highs, the quantity of flipped properties was four percent lower than the previous quarter and down three percent from a year ago, reaching a two-year low. And the average gross flipping profit of $69,500 in the quarter represented an average 47.8 percent return on investment (ROI) compared to the original acquisition price, down from a 48.9 percent average gross flipping ROI in the previous quarter and down from an average gross flipping ROI of 50.3 percent one year earlier to the lowest level since the second quarter of 2015.
“The 2018 housing market is a double-edged sword for home flippers,” said Daren Blomquist, Senior Vice President at ATTOM Data Solutions. “Rapidly rising home prices boosted by low available inventory of homes for sale or for rent are padding profits at the back end when flippers sell, but those same market realities are eroding flipping returns at the front end by forcing flippers to pay more to acquire homes to flip.”
Separately, mortgage rates fell for the second consecutive week, according to new Freddie Mac data. The 30-year fixed-rate mortgage (FRM) averaged 4.54 percent for the week ending June 7, down from last week when it averaged 4.56 percent. The 15-year FRM this week averaged 4.01 percent, down from last week when it averaged 4.06 percent. And the five-year Treasury-indexed hybrid adjustable-rate mortgage (ARM) averaged 3.74 percent this week, down from last week when it averaged 3.80 percent. 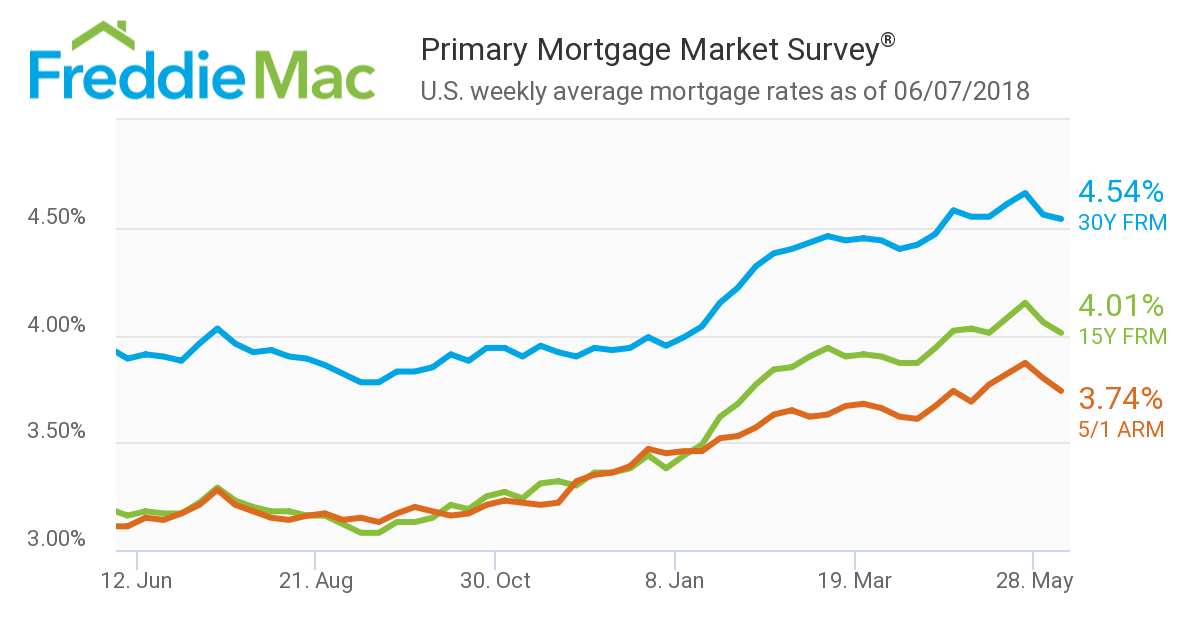 “Although demand has remained steadfast against the backdrop of this year’s higher borrowing costs, it’s important to note that the growth rate of purchase loan balances has moderated so far this year, and particularly since March,” said Sam Khater, Freddie Mac’s Chief Economist. “This slowdown indicates that buyers are having difficulty stretching to keep up with the pace of home-price growth. While the very healthy job market continues to fuel interest in buying a home, the supply shortages in most markets are pushing prices higher and currently keeping sales at a standstill. Listings for new and existing homes need to increase in the months ahead to moderate price growth and reignite sales activity.”
And there was little sunny news the Mortgage Bankers Association’s (MBA) Quarterly Mortgage Bankers Performance Report, which found independent mortgage banks and mortgage subsidiaries of chartered banks absorbing a net loss of $118 on each loan they originated in the first quarter, down from a reported gain of $237 per loan in the fourth quarter of 2017. Net production losses were $118 per loan (8 basis points) in the first quarter, marking the first time since the first quarter of 2014 that the MBA’s survey recorded a net production loss.
Average production volume was $450 million per company in the first quarter, down from $505 million per company in the fourth quarter, while the volume by count per company averaged 1,866 loans in the first quarter, down from 2,059 loans in the fourth quarter of 2017.
“In the first quarter of 2018, falling volume drove net production profitability into the red for only the second time since the inception of our report in the third quarter of 2008,” said Marina Walsh, MBA’s Vice President of Industry Analysis. “While production revenues per loan actually increased in the first quarter, we also reached a study-high for total production expenses at $8,957 per loan, as volume dropped.”
As for the homeowners, they’re mostly not complaining. The Fannie Mae Home Purchase Sentiment Index (HPSI) rose 0.6 points in May to 92.3, creating a new all-time survey high for the second consecutive month. Still, there is a difference of opinion on homebuying and selling: The net share of respondents who reported that now is a good time to sell a home increased to 46 percent in May, up 14 percentage points year-over-year, but the net share who said now is a good time to buy a home decreased to 28 percent, showing little improvement from one year earlier.
“The HPSI edged up to another survey high in May, bolstered in part by a fresh record high in the net share of consumers who say it's a good time to sell a home,” said Doug Duncan, Senior Vice President and Chief Economist at Fannie Mae. “However, the perception of high home prices that underlies this optimism cuts both ways, boosting not only the good-time-to-sell sentiment but also the view that it's a bad time to buy, and presenting a potential dilemma for repeat buyers.”
Link copied
Published
Jun 07, 2018
Coming Up See All
Aug
03
New York Mortgage Expo
Suffern, NY
Aug
10
OriginatorTech
Virtual
•
11:00 AM ET
Aug
12
California Mortgage Expo – San Diego
San Diego, CA
Get the Daily
Advertisement
Advertisement
FHA
FHA Extends Single-Family Eviction Moratorium