Existing-home sales fell for a third straight month, according to new data from the National Association of Realtors (NAR).
Total existing-home sales in January dropped by 1.2 percent from December to a seasonally adjusted annual rate of 4.94 million. Compared to January 2018, sales were down 8.5 percent from last year’s 5.40 million level.
While sales dropped, the median existing-home price for all housing types in January increased to $247,500, a 2.8 percent uptick from $240,800 one year earlier. January’s marked the 83rd straight month of year-over-year gains in the median home price, although it was also the slowest growth recorded since February 2012.
Also on the rise was the total housing inventory, which grew to 1.59 million in January, up from 1.53 million existing homes for sale in December and also up from 1.52 million a year ago. This marked the sixth consecutive month of annualized growth in housing inventory. But NAR Chief Economist Lawrence Yun warned that the inventory issue is still a challenge.
“In particular, the lower end of the market is experiencing a greater shortage, and more home construction is needed,” said Yun. “Taking steps to lower construction costs would be a tremendous help. Local zoning ordinances should also be reformed, while the housing permitting process must be expedited; these simple acts would immediately increase homeownership opportunities and boost local economies.”
Joel Kan, Associate Vice President of Industry Surveys and Forecasts for the Mortgage Bankers Association (MBA), said, "Existing-home sales decreased in January and have now fallen year-over-year for five straight months. January’s weak sales pace was likely the result of the lingering effects of stock market volatility and lower consumer confidence toward the end of 2018. Much of the January decrease was in the lower price tiers, which also tends to be where inventory is the tightest." 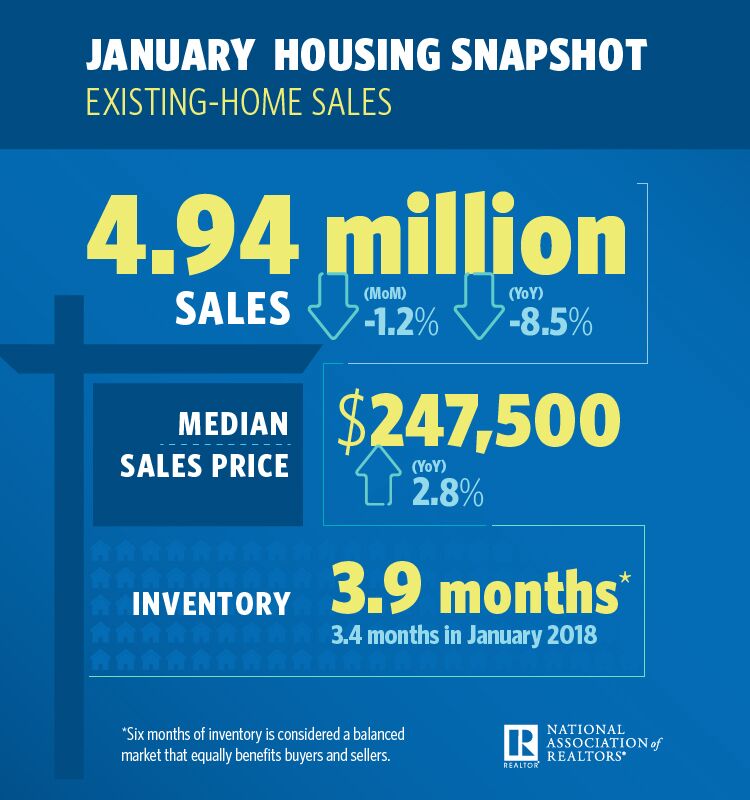