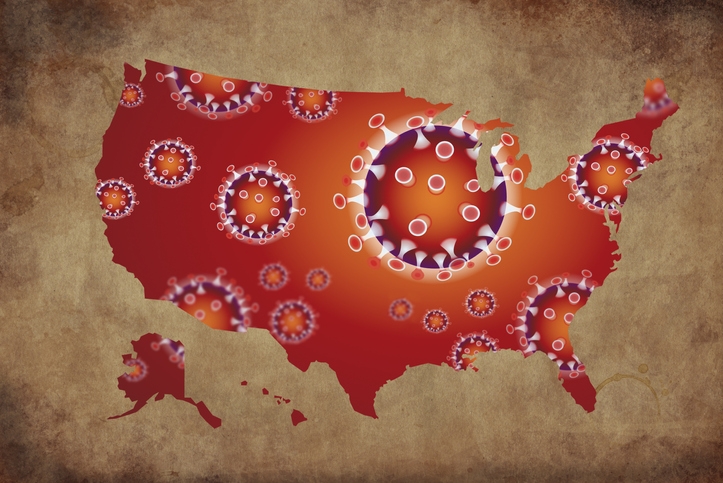 ATTOM Data Solutions has released a Special Report spotlighting county-level housing markets around the nation that are more or less vulnerable to the impact of the Coronavirus pandemic. The report shows that the Northeast has the largest concentration of the most at-risk counties, with clusters in New Jersey and Florida, while the West and Midwest have the smallest.
The report reveals that housing markets in 14 of New Jersey’s 21 counties are among the 50 most vulnerable in the country to the economic impact of the Coronavirus. The top 50 also include four in New York, three in Connecticut and 10 from Florida, but only one in California, none in other West Coast states and only one in the Southwest.
“It’s too early to tell how much effect the Coronavirus fallout will have on different housing markets around the country. But the impact is likely to be significant from region to region and county to county,” said Todd Teta, chief product officer with ATTOM Data Solutions. “What we’ve done is spotlight areas that appear to be more or less at risk based on several important factors. From that analysis, it looks like the Northeast is more at risk than other areas. As we head into the Spring homebuying season, the next few months will reveal how severe the impact will be.”
According to the report, the 14 counties in New Jersey include five in the New York City suburban area: Bergen, Essex, Passaic, Middlesex and Union counties. The 10 counties in Florida are concentrated in the northern and central sections of the state, including Flagler, Lake, Clay, Hernando and Osceola counties.
New York counties among the top 50 most at risk include Rockland County, in the New York City metropolitan area; Orange County, in the Poughkeepsie metro area; Rensselaer County, in the Albany metro area; and Ulster County, west of Poughkeepsie. Other southern counties that are in the top 50 are spread across Delaware, Maryland, North Carolina, South Carolina, Louisiana and Virginia.
Among the counties analyzed, only two in the West and five in the Midwest (all in Illinois) rank among the top 50 most at risk from problems connected to the Coronavirus outbreak. The two western counties are Shasta County, Calif., in the Redding metropolitan statistical area and Navajo County, Ariz., northeast of Phoenix. The Midwestern counties are McHenry County, Ill.; Kane County, Ill.; Will County, Ill. and Lake County, Ill., all in the Chicago metro area; and Tazewell County, Ill., in the Peoria metro area.
Texas has 10 of the 50 least vulnerable counties from among the 483 included in the report, followed by Wisconsin with seven and Colorado with five. The 10 counties in Texas include three in the Dallas-Fort Worth metro area (Dallas, Collin and Tarrant counties) and two in the Midland-Odessa area (Ector and Midland counties).
Measures are being taken by the government to ease the negative impact of COVID-19 on the housing market, as the Coronavirus Aid, Relief and Economic Security Act (CARES Act) was signed into law to pump much-needed funds back into the economy, and the U.S. Department of Housing & Urban Development (HUD) has announced mortgage payment relief and forbearance options for families experiencing financial hardship.
Link copied
Published
Apr 07, 2020
Coming Up See All
May
17
OriginatorTech
Virtual
•
11:00 AM ET
May
19
Mastering Cash-out Refis to Drive Volume in Today's Mortgage Market
Webinar
1:00 PM ET
May
24
Suncoast Mortgage Expo
Tampa, FL
Get the Daily
Advertisement
Advertisement
Community
Leading LOs 2022