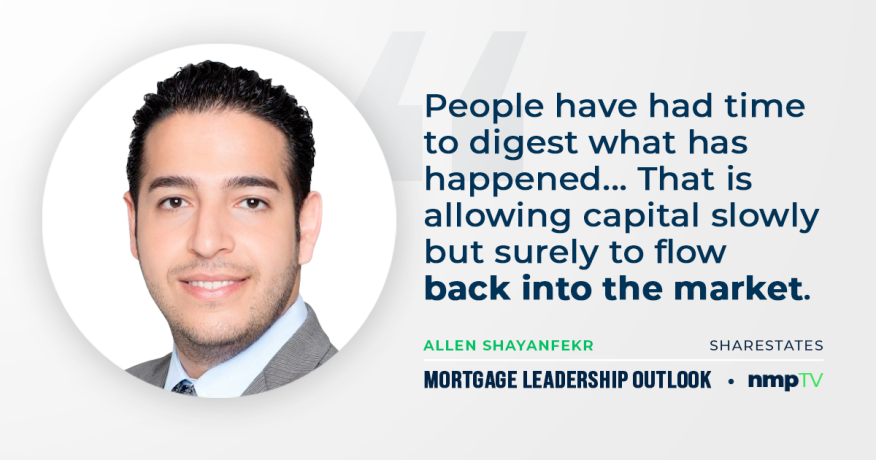 Allen Shayanfekr, CEO of Sharestates, was the featured guest on the Thursday, June 4 installment of the Mortgage Leadership Outlook series. Shayanfekr joined series host Andrew Berman, head of engagement and outreach for National Mortgage Professional magazine, as they explored how Sharestates fared during the COVID-19 pandemic, what trends he is seeing in the industry and more.
As the COVID-19 pandemic continues to pose challenges for the mortgage industry, the Mortgage Leadership Outlook series helps you, the mortgage professional, navigate through these times of uncertainty.
Shayanfekr serves as CEO and co-founder of Sharestates, a real estate investment marketplace that allows individual and institutional investors to participate in vetted debt and equity offerings. According to the company, any offering that goes through Sharestates' platform has to pass through a 34-point underwriting process.
Before joining Sharestates, Shayanfekr held positions at Nations United Management and Atlantis Organization. Shayanfekr was also featured in a recent edition of National Mortgage Professional magazine with his article, "How Independent Mortgage Companies Are Leveraging Fintech to Win in Local Markets."
Shayanfekr was open about hard-hit Sharestates was during the pandemic. Loan volume dropped about 80-85%. “As a function of capital availability, we’ve seen a drop-off,” he said. “Most of that capital has been reliant on warehouse line financing or securitization financing, both of which have been in shambles since the COVID-19 pandemic.”
To address the issues, Sharestates shifted a lot of resources from sales and marketing, processing, post-closing, closing and underwriting teams to asset management. “We had more people ready to reach out to borrowers,” Shayanfekr said. “We had 120 people on staff and we were trying to save as many jobs as possible.”
The company didn’t know if it would qualify for PPP loans and other stimulus. It couldn’t keep people on staff who weren’t doing anything. “We needed to repurpose staff members as quickly as possible and cross-train them,” he said. In the end, 20 out of 120 people were furloughed. “We saved far more jobs than we would have otherwise,” he said.

Highlights from the interview

►“People have had time to digest what has happened,” Shayanfekr said. “The panic has subsided to some extent. That is allowing capital slowly, but surely, to flow back into the market.” He predicts there will be more normalcy in August and September if there no spikes in infections or another lockdown.
►The crowdfunding that Sharestates does isn’t new per se. Syndication, which is basically people getting together to pool funds for an investment, goes back decades. The JOBS Act of 2012 created the modern version that allowed two or more people to fund a project regardless of what the asset is. Sharestates brought it to the real estate sector. The JOBS Act also removed the requirement that only accredited investors could back projects. It also allowed the public advertising of solicitations for investments.
►Sharestates grew its business by appealing to larger institutional investors. That was needed to attract crowdfunding from retail investors. “When we first started, went to friends and families. It was a new concept. We thought it would be easier to get it off the ground. If they built it, they would come,” Shayanfekr said. They discovered smaller investors were skeptical. “We first had to make the platform look legitimate,” he said explaining the best way to do that was to scale the business, give it a track record, and show performance.” Sharestates has grown from that point to be 60% institutional investors and 40% retail.
►“We had grown quite a bit in the five years we launched our business,” Shayanfekr said, having completed $2.5 billion in loan volume. Until March, Sharestates was doing $100 million monthly in loan volume. “We thankfully have diversified our capital sources enough through the years. While we’re not doing $100 million a month, we’re still able to operate. We felt it just like anybody else. We had investors who had to go on pause while they were figuring out internally what they were going to do the next step. Ninety days later, I’m confident [almost] all of our investors are going to survive on the institutional side.”
►Sharestates was able to make the transition to work from home because it had developed proprietary technology, as well as having business interruption and disaster recovery plans in place. Everything was cloud-based. Employees could log in from anywhere. The firm also maintained a sense of community by taking part in weekly happy hours via Zoom. People could still interact with each other. “The business has been working pretty fluidly fortunately,” he said.
►“Our company will survive. We were built the right way to survive this kind of downturn,” he said. It will take a significant amount of time to get business back to usual, but the economy is returning. “The worst is behind us in terms of the country panicking. In terms of what is going to happen to our economy, is the market going to tank? There’s been a ton of stimulus pumped into the economy to stabilize things. We will need more stimulus because of the high unemployment rate. Don’t know what that means for the economy long-term. We may not see an impact for a year or more,” Shayanfekr said.
Watch the full interview below:
Previous guests in the Mortgage Leadership Outlook series include Mat Ishbia, Carl Markman, David H. Stevens, David Luna, Barry Habib‍, Rob Chrisman and more. See all the interviews from the Mortgage Leadership Outlook series on its YouTube channel.
Link copied
Published
Jun 05, 2020
Coming Up See All
Oct
19
Suncoast Mortgage Expo
Tampa, FL
Nov
10
Motor City Mortgage Expo
Detroit, MI
Nov
18
Texas Mortgage Roundup – Houston
Houston, TX
Get the Daily
Advertisement
Advertisement
Analysis and Data
MBA Forecast: Purchase Originations To Rise 9% In 2022