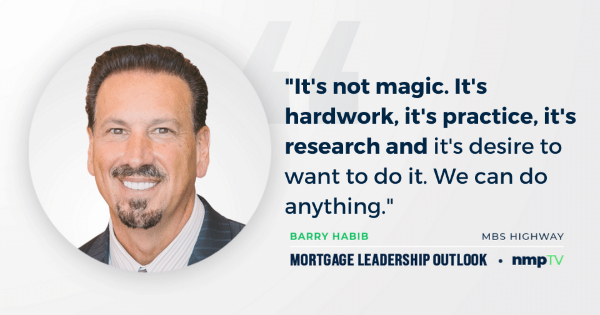 Barry Habib, CEO of MBS Highway, TV commentator and author, made his return to the Mortgage Leadership Outlook on Wednesday. Habib and series' host Andrew Berman, head of engagement and outreach for National Mortgage Professional magazine discussed the possible impacts on the housing industry following the 2020 elections and 2021 predictions on rates. In an extensive interview, Habib also shared lessons for mortgage professionals from his newest book Money in the Streets.

Habib is an American entrepreneur and frequent media resource and appears monthly on CNBC and FOX. MBS Highway is a company and platform that helps mortgage professionals and real estate agents articulate the opportunity in the housing market for their clients, along with a better understanding of the interest rate environment.

Check out the full interview between Habib and Berman below.