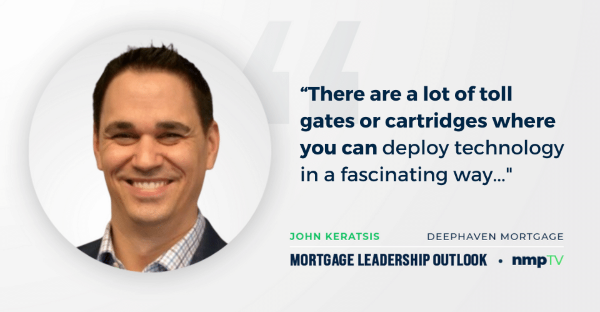 On Wednesday, March 17, the Mortgage Leadership Outlook featured John Keratsis, president and CEO of Deephaven Mortgage. He joined host Andrew Berman, head of engagement and outreach for National Mortgage Professional Magazine, as they explored Keratsis' history as the founder of Boston National Title (acquired by Incenter, a Blackstone portfolio company), what excited him about the opportunity in Non-QM, the outlook for Non-QM, and more.

Keratsis joined Deephaven Mortgage in February to lead the next phase of Deephaven's strategic growth. Prior to Deephaven, Keratsis was the senior managing director at Incenter where he oversaw several mortgage services and specialty lending business including, among others, Boston National Title, a nationwide title and settlement services platform; Agents National Title Insurance Company, a title insurance underwriter; and a large-scale offshore mortgage fulfillment operation. Prior to Incenter, Keratsis spent nearly 12 years as founder and CEO of Boston National Holdings, which Incenter acquired in November 2016.

Check out the full interview between Keratsis and Berman below.