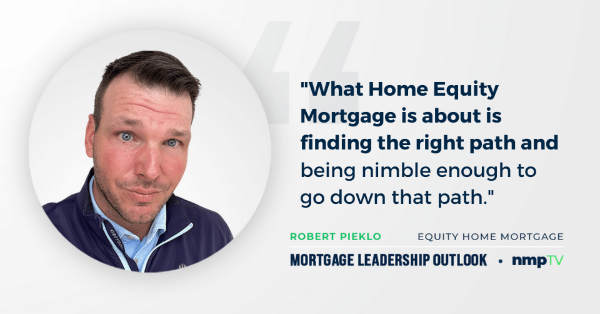 On Wednesday, April 21, the Mortgage Leadership Outlook featured Robert Pieklo, CEO, Equity Home Mortgage. Pieklo joined series' host Andrew Berman, head of engagement and outreach for National Mortgage Professional Magazine, to discuss the value of a mortgage broker, his lessons from the last margin compression, the importance of borrower education, how to leverage the Clubhouse app and more.

After spending 17 years as a mortgage executive, Pieklo decided to start a small origination company with Shaun Hamman. He got his start in 2003 with AFR as an originator. That company became a mid-size national bank, and Pieklo was promoted to run the retail division and then capital markets. After 4 years, he was promoted to the company’s chief strategy officer to steer company growth plans; he was also responsible for all mortgage and servicing sales, as well as trading and hedging for the company.

After selling his stake in the company in 2018, Pieklo went on to run originations for a large public mortgage company. Under his watch, he turned the originations business around and grew the volume from 500mm to 1.5b a month, leading the division to profitability. After 14 months, the company sold to a large publicly traded REIT.

Originating was always in his heart and he is looking to build a company based on honesty, transparency and serving the customer.‍

See the full conversation between Pieklo and Berman below.‍