Applications To Buy New Homes In November Down 25% YOY 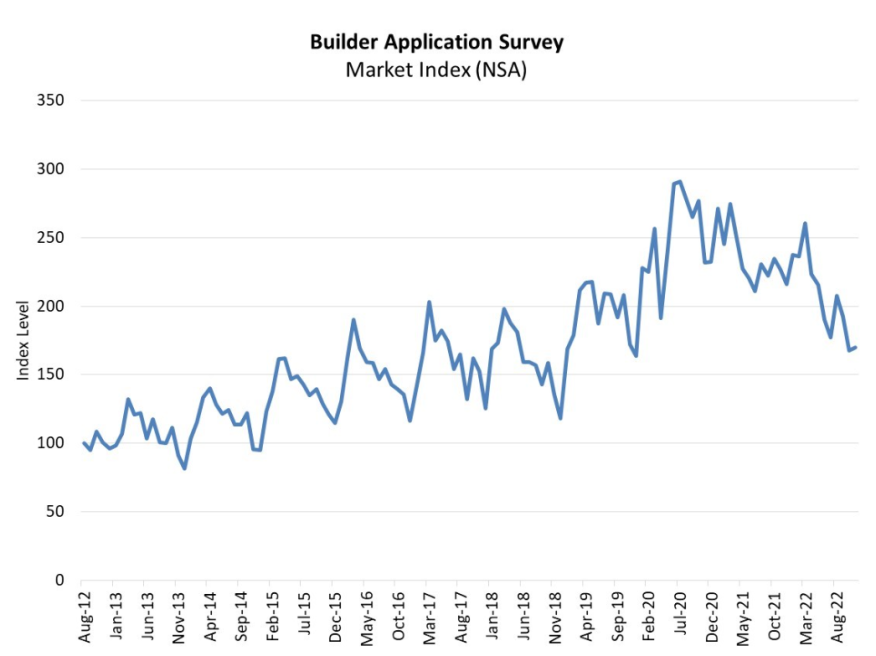 Mortgage applications to buy new homes increased slightly in November from a month earlier, but were still down 25.2% from a year earlier, the Mortgage Bankers Association (MBA) said Tuesday.

The MBA’s Builder Application Survey (BAS) data for November 2022 found that applications increased by 1% from October. The result does not include any adjustment for typical seasonal patterns.

While mortgage rates remain high compared to the past few years, Kan said, the 30-year fixed rate was 6.49% at the end of November after reaching 7.16% in mid-October, “providing a slight boost in purchasing power for buyers. However, both applications and sales remained over 20% below last year’s pace.”

He added, “Reflecting the slowdown at the upper end of the market, the average loan size on new home purchase applications was $392,465, the lowest since June 2021.”

The MBA estimated new single-family home sales — which have consistently been a leading indicator of the U.S. Census Bureau’s New Residential Sales report —  at a seasonally adjusted annual rate of 660,000 units in November, based on data from the BAS. The new home sales estimate is derived using mortgage application information from the BAS, as well as assumptions about market coverage and other factors.

MBA’s Builder Application Survey tracks application volume from mortgage subsidiaries of home builders across the country. Using that data, as well as data from other sources, MBA provides an early estimate of new home sales volumes at the national, state, and metro level. The data also provides information regarding the types of loans used by new home buyers.

Official new home sales estimates are conducted by the Census Bureau on a monthly basis. In that data, new home sales are recorded at contract signing, which typically coincides with the mortgage application.