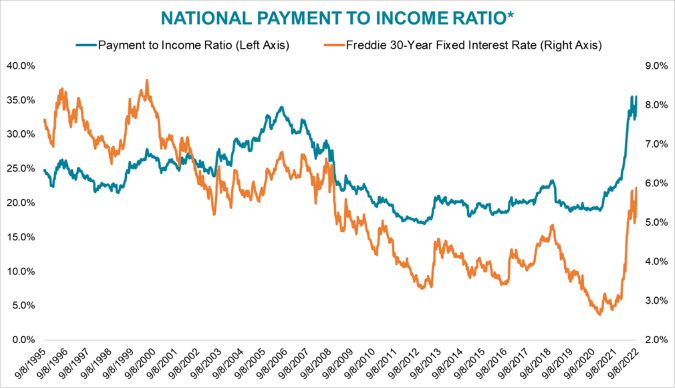 With the average rate for a 30-year fixed mortgage rising to 5.89% this week, the highest level since 2008, home affordability has fallen to a new 35-year low, Black Knight Inc. said Thursday.

The mortgage technology and data provider said the latest increase in rates has wide implications for the housing market.

Walden said the rates have resulted in the least affordable week for housing since 1987. It currently takes 35.51% of median income to make the monthly principal & interest (P&I) payment on a median home with a 30-year mortgage and 20% down. That’s up marginally from the previous 35-year high back in June, when the payment-to-income ratio reached 35.49% with rates at 5.81%.

According to the standard set by the U.S. Department of Housing and Urban Development, a mortgage is considered affordable when it takes 30% or less of median income to make the monthly payment.

What is especially striking, Walden said, is how fast so much has changed. The 30-year fixed mortgage rate was at an all-time low of 2.68% just 21 months ago, in December 2020, according to Freddie Mac.

This week’s jump in rates also cut the population of high-quality refinance candidates to its lowest level since the summer of 2006 – when rates were nearly a full point higher than they are now, Black Knight said.

As of Thursday, just 452,000 high-quality candidates remain, it said. Black Knight defines high-quality refinance candidates as 30-year mortgage holders with a maximum 80% loan-to-value (LTV) ratio and credit scores of 720 or higher, who could reduce their current first-lien rate 0.75% by refinancing.

Should all of the high-quality candidates actually refinance their mortgages, they could benefit from an aggregate potential of $139 million in monthly savings, or about $315 per month per borrower, Black Knight said. Fewer than 100,000 candidates remain who could save at least $400 per month by refinancing, it said.

Black Knight noted that its LTV and credit-score assumptions are intended to by conservative, and that there are non-cash-out refi products available for borrowers with even higher LTVs and lower credit scores.

Based on that, there are over 1 million mortgage-holders overall who currently have interest rates at least 0.75% above today’s rate and could benefit from refinancing, it said.

Sales of new single-family homes rose more than 2% in December from a month earlier, despite the slowing economy and downturn in the housing market. According to the monthly report released jointly by the U.S. Census Bureau and the U.S. Department of Housing and Urban Devel...

Bidding wars have returned in some markets, but there's still a long way to go.