Can Consumers Save Big By Using Wholesale Mortgage Brokers? 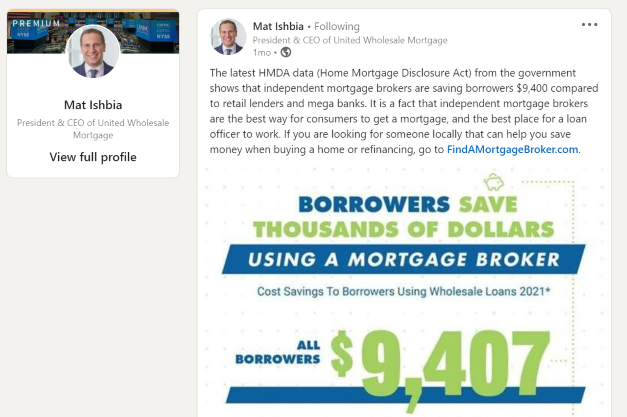 Two of the largest wholesale lenders in the United States say homebuyers can save big when they get a loan from an independent mortgage broker, and they claim they have the data to back that up.

National Mortgage Professional, however, has been unable to confirm the savings claims, and the Consumer Financial Protection Bureau (CFPB) has balked at commenting on them.

Both United Wholesale Mortgage (UWM) and Homepoint maintain that data collected by the CFPB under the Home Disclosure Act (HMDA) shows consumers can save more than $9,000 in interest and fees on a 30-year, fixed-rate mortgage when they secure the loan from an independent broker.

In a post on his LinkedIn page, UWM CEO Mat Ishbia cited information he said was from HMDA, stating that consumers in 2021 saved $9,407 by securing a 30-year fixed mortgage from a wholesale broker. The post, which went up about a month ago and recorded nearly 1,000 reactions, was shared more than 700 times.

The savings consisted of $1,460 in upfront fees and $7,947 in interest paid over the life of the mortgage. According to Homepoint spokesman Brad Pettiford, the interest rate savings by securing a mortgage through a wholesale broker, instead from a nonbank retail lender represents approximately one-eighth of a point, on average.

“I wouldn’t say our goal is to put retail home lending out of business,” Pettiford said about promoting the savings information. “We’re hoping (this information) gets more and more retail loan originators to switch over to wholesale lending.”

When NMP asked UWM to share links to the federal government’s information showing how much independent wholesale brokers can save consumers on interest and fees, officials instead sent links to promotional information, some of which came from the Association of Independent Mortgage Experts (AIME), a group that promotes wholesale mortgage brokers and has strong ties with UWM.

When NMP asked Homepoint to show how they came up with the savings data, the company instead made two of their executives available for an interview: Matt Cassell, managing director of production strategy, and Sam Gonzales, senior managing director of data science and consumer analysis.

Cassell’s job, Pettiford said, is “essentially serving as chief of staff for our CEO, Willie Newman, and (for) President of Originations Phil Shoemaker, leading special projects like the HMDA analysis.”

Cassel said Homepoint used HMDA data primarily from 2018 to 2021 for the Top 10 retailers and wholesalers.

“We pulled down HMDA for both upfront costs and the interest rates over the life of loan, and we looked at a number of characteristics," he said. "And our data science team kept us within certain buckets to ensure our analysis was apples to apples between populations, and that’s how we came up with the $9,407."

He added, “We sliced the data by different populations, and we looked at total population and broke it out by minority population as well as low- to moderate-income populations. Across the board, between these Top 10 retailers and wholesalers, there was a significant difference in upfront costs.”

In addition, Homepoint examined borrowers with a debt-to-income (DTI) ratio between 41% and 45%.

“Forty-one percent to 45%, I believe, is the most prevalent range in terms of population,” Gonzales said. “What we were trying to do is ensure we’re looking at very similar loans across retail and wholesale, so we’re not baking in bias implied by the population.”

Because of that, he said, the claimed upfront savings have significant value to consumers. “Honestly, I think the (nearly) $1,500 upfront is probably more impactful (for consumers), because that’s money people have to bring to the closing table, and I think if we look at statistics on savings across the country, $1,500 is meaningful for a large number of people,” Gonzales said. “Obviously, they’re paying less interest but that is spread out."

He continued, “I think from an out-of-pocket perspective, the upfront costs are the real savings people will feel. The lower interest rate is an ancillary benefit.”.

Asked whether the study — which is also the subject of a webinar Home Point Financial CEO Newman presents to mortgage brokers — has brought about changes in consumer behavior, Cassell replied, “That’s our hope.”

Asked if the study’s presentation to brokers and loan officers has had any impact, Pettiford said, “In all of 2021, there were about 6,300 LOs that went from retail to wholesale. In the first seven months of 2022 — so between January and July — it was over 5,700.”

NMP could not independently confirm that number.

In fact, NMP reached out to the CFPB in Washington, D.C., to confirm the data and analysis provided by Homepoint executives. Raul Cisneros, a spokesman for the CFPB, said he would not do that.

“We will not be able to comment, as it is not our report,” he wrote in an email.

While the CFPB publishes HMDA data, which provides loan-level information about mortgages, the agency declined to comment on how Homepoint may have used the data to come up with its estimate.

Rocket Mortgage has a different take on the study.

Emerson added, “Unless such claims are made by an independent third party, these sorts of ‘findings’ should be seen for what they are — self-promotion.”