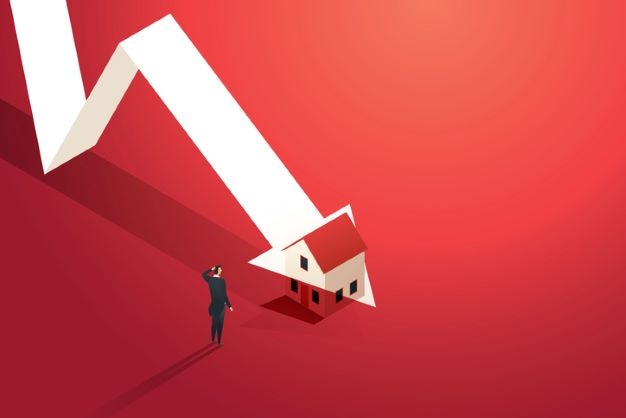 Down 14.4% in July from a year earlier, declining home sales are a symptom a cooling housing market.

The market potential for existing home sales saw an annual drop in July of 14.4%.

“According to our Potential Home Sales Model, the market potential for existing-home sales in July was estimated to be 5.45 million at a seasonally adjusted annualized rate, down 0.2% compared with last month, and 14.4% lower than one year ago,” said Mark Fleming, the company’s chief economist.

Fleming places some of the blame on higher mortgage rates. The 30-year fixed-mortgage rate hovers around 5.5% today, Bankrate says, compared to last year when the rate was under 3%, according to the Federal Reserve Bank of St. Louis.

“It’s clear that the housing market has slowed from its pandemic-era frenzy, as buyers adjust to the new reality of higher mortgage rates," he said. "Excluding the spring of 2020, when the housing market came to a brief halt, existing-home sales in June declined to their lowest level since February 2019."

"The decline is not a crash," Fleming added, "but rather an adjustment to a not-so-new normal. Potential homebuyers are facing greater economic uncertainty and mortgage rate volatility, but there remains a deep-seated desire for homeownership, especially among millennials.”

And while median household income has increased, he says it’s not enough to offset affordability issues.

“Relative to one year ago, median household income increased by approximately 4.7% in July, but it was not enough to offset the affordability loss from the 2.5-percentage-point increase in the 30-year, fixed mortgage rate. The result was a 23% decline in house-buying power, which was one of the primary culprits behind cooling demand,” Fleming said.

“The annual decline in house-buying power reduced market potential by nearly 520,000 sales compared with a year ago," he continued. "However, the month-over-month trend offered a bright spot as house-buying power edged higher by 1.7% in July, as rates dipped lower and household income continued to rise. A decrease, or even stabilization, in mortgage rates may encourage some potential buyers to come off the sidelines."

Fleming said the presence of millennials — measured to be the largest generation in the United States at about 73 million strong and between the ages of 26 to 41 — is being felt in home sales.

“Despite the year-over-year decline in affordability, household formation — a key and long-term driver of housing market potential — remained positive," he said. "The rise in household formation contributed 60,000 potential home sales in July, because the decision to buy a home is both a financial and lifestyle decision and many millennials are aging into marriage and family formation, which are highly correlated with the decision to become a homeowner."

“Many of these households are also facing rising rents," he added, "which may accelerate the decision to purchase a home. Rent-cost pressure and lifestyle choices may help to explain why the homeownership rate for households under 35 years old increased the most among all other age cohorts, rising by 0.8 percentage points in the second quarter of 2022 compared with the fourth quarter of 2021, despite rising mortgage rates."

He also said there are fewer home sellers because they don't want to let go of their low interest rates for a higher one when they buy a new house.

“Since home sellers are also prospective home buyers, homeowners choosing not to sell reduced housing market potential by 84,000 sales compared with one year ago," he said.

“However, homeowners today have record levels of equity, and as their equity grows, they are more likely to consider using that equity to purchase another home that better suits their needs," Fleming said. "Rising home prices contributed to an increase of 154,000 potential home sales compared with one year ago."

He added that slowing sales are a symptom of a housing market that’s coming off a two-year pandemic-influenced frenzy and settling into a pace that’s "more in line with historical norms."

“From the perspective of home buyers and sellers," he said, "there are financial concerns that may hold them back from the market, but there are still plenty of reasons to jump in. Millennials continue to age into their prime home-buying years, which will keep long-run demand steady.”