Housing Market At 'An Inflection Point' 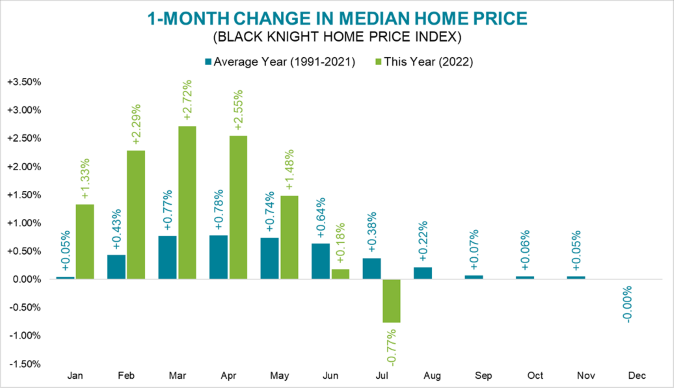 For the first time in 32 months, home prices posted a month-over-month decline in July, marking what one analyst considers an “inflection point” for the nation’s housing market.

Andy Walden, vice president of enterprise strategy for Black Knight Inc., wrote in a blog post that the latest data from the Black Knight Home Price Index “shows clear signs of an inflection point,” as housing price growth “tipped from deceleration to decline” in July.

“Annual home price growth still clocked in at 14.3% — more than three times the long-run average — but most of that appreciation occurred in the last months of 2021 and earlier this year,” Walden wrote. “Such strong annual growth rates can hide underlying weakness. Month-over-month data gives us a much clearer picture of just how much — and how quickly — the housing market has shifted.”

He notes that the median home price fell by 0.77% in July, the largest single-month drop since January 2011. While seemingly small, July’s decline on a seasonally adjusted basis ranked among the 10 largest monthly declines on record, dating back more than 30 years, Walden said.

“At the start of 2022, home-price growth was running at 28 times the 30-year seasonal average,” he continued. “It was the tail end of an unprecedented run of appreciation. Then, interest rates began to tick up and that growth tapered to just over five times average in February. By May, growth had contracted to twice the normal rate, and in June price growth was 70% below the long-run average, but still positive.”

Now, he said, home prices have marked their first monthly decline in nearly three years ­— and in July, a month when prices typically rise by about 0.4%.

Looking ahead, he added, “we are moving into what have historically been more neutral months for the housing market. Even during the Great Recession, home prices typically rose marginally from March to May, with effectively all price declines during that era taking place from July through February.”

Walden noted that with housing affordability still near its worst levels in more than 35 years, the market should continue to see downward price pressure in the coming months.

“It would require some combination of either a 30% rise in incomes, a 2-percentage-point decline in 30-year rates, or home prices pulling back another 20% to bring affordability back in line with long run averages,” he said.

While housing prices through the end of July were off their peak only by less than 1% nationwide, some markets have seen more significant pullbacks, Walden said.

More than 85% of major markets have seen prices come off their peaks through July, with a third dropping more than 1% and more than one in 10 falling by 4% or more, he said.

“The velocity of this market correction is as noteworthy as the declines,” Walden said. “There have been several examples over the past 30 years where markets have seen double-digit price drops. None, however, come close to what San Jose has experienced in the span of only three months.”

In the early 1990s, for example, it took an average of 2.5 years for a number of West Coast markets to shed 10% of their value, he said. “Even during the Great Recession of the mid-2000s, it took two years, on average, for prices to drop 10%. Riverside, Calif., dropped the fastest, and it still took 13 months.”

The fastest price drop on record, before the recent downturn, also belonged to San Jose, which saw prices fall 10% in eight months back in 2001, when the dot-com bubble burst.

While talk of sudden, sharp home-price declines may be jolting, he said, “the truth is that the market is in about as strong a position as it has ever been to absorb the impact of such a correction. More than that: at the macro level, these declines are a welcome sight and have been a long time in coming.”

Through the pandemic, record low interest rates enabled the average home price to rise at a record pace, resulting in the average home being valued at more than six times the median household income, “the largest multiple on record, dating back more than 50 years,” Walden said.

“While this has built unprecedented homeowner wealth in the form of equity, it has also created immense and sustained affordability challenges, especially for first time homebuyers,” he added.