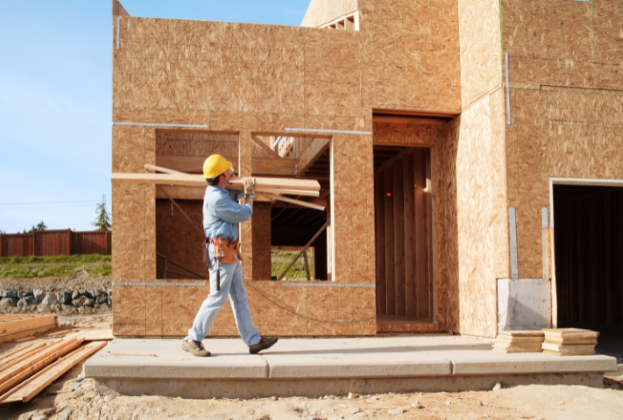 December wrapped up a terrible year for new home construction, posting the fourth straight monthly drop in housing starts as 2022 ended with a 3% overall decline — the first annual drop since 2009.

At least one economist, however, sees signs that the worst may be over for the homebuilding industry.

According to the report released Thursday by the U.S. Census Bureau and the U.S. Department of Housing and Urban Development, privately owned housing starts in December were at a seasonally adjusted annual rate of 1.38 million, 1.4% below the revised November estimate of 1.4 million and a 21.8% drop from a year earlier. December’s results beat analysts’ expectations.

Newly constructed homes were completed in December at a seasonally adjusted annual rate of 1.4 million, 8.4% below the revised November estimate of 1.54 million but 6.4% above the December 2021 rate.

Privately owned housing units authorized by building permits in December were at a seasonally adjusted annual rate of 1.33 million, 1.6% below the revised November rate and 29.9% below the December 2021 rate.

'Worst May Be Over'

Odeta Kushi, deputy chief economist for First American Financial Corp., said the report does include some signs that the “worst of the housing downturn may be over.”

Construction of multi-family homes, however, tell a different story, she said.

In addition, she said, “Homebuilder sentiment increased for the first time in a year in January due to lower mortgage rates, though general perceptions among builders remain poor. As mortgage rates moderate and with the spring season around the corner, it’s possible that the worst of the impact to sales is behind us.”

Kushi said builders continue to offer incentives — such as price cuts, paying points, and providing mortgage rate buy-downs — to bolster sales and entice buyers back into the market.

She also said the inventory of new homes on the market continues to increase.

“From 2000 until the pandemic, new homes on average made up approximately 11% of total inventory,” Kushi said. “Today, that share has skyrocketed to 29% as existing homeowners stay put, while new-home inventory rises.”

Builders have a large backlog of single-family homes under construction, she said, and will likely continue to focus on completing those projects rather than starting new ones “until there is a meaningful and sustained increase in demand.”

“The housing market remains fundamentally underbuilt and as demand rises, it will be important to boost supply in order for price growth to continue to adjust to more sustainable levels,” she added. “While builders can’t make existing homeowners move, they can add new homes to the stock.”