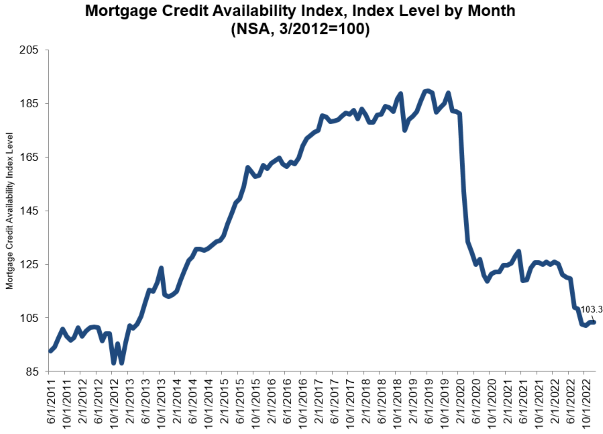 According to the MBA’s Mortgage Credit Availability Index (MCAI), which analyzes data from ICE Mortgage Technology, the MCAI fell 0.1% to 103.3 in December. A decline in the index indicates that lending standards are tightening, while increases indicate loosening credit. The index was benchmarked to 100 in March 2012.

Kan said the doubling of mortgage rates over the past year “caused credit availability to shrink 18% during the same period. This pivot in the market resulted in lenders exiting certain origination channels to manage their operational costs or stop lending altogether, which was a main driver in the decrease in credit supply.”

In addition, he said, “investors stopped offering many streamlined refinance programs as rates increased and the refinance market shrank. The segment of the market which showed the sharpest decline in credit availability was FHA and VA lending — which saw a 23% decline over 12 months.”

The Conventional, Government, Conforming, and Jumbo MCAIs are constructed using the same methodology as the Total MCAI, and are designed to show relative credit risk/availability for their respective index. The primary difference between the total MCAI and the Component Indices are the population of the loan programs they examine. The Government MCAI examines FHA/VA/USDA loan programs, while the Conventional MCAI examines non-government loans.

The MCAI is calculated using several factors related to borrower eligibility (credit score, loan type, loan-to-value ratio, etc.). The metrics and underwriting criteria for over 95 lenders/investors are combined by MBA using data made available via ICE Mortgage Technology and a proprietary formula derived by MBA to calculate the MCAI, a summary measure which indicates the availability of mortgage credit at a point in time.