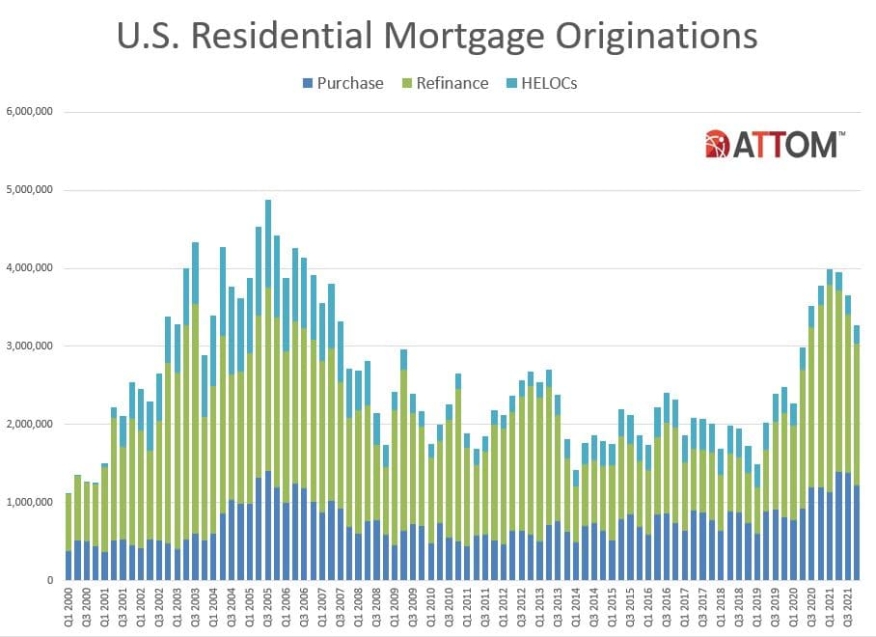 The residential mortgage industry is entering a new era with mortgage origination rates dropping 11% from the third quarter of 2021 and 13% from the fourth quarter of 2020, according to ATTOM's report.

The report released Thursday found the annual decrease marked the largest since late 2018. The overall drop-off resulted from across-the-board quarterly declines in all three categories of conventional loans - purchase, refinance and home-equity. Only purchases lending remained up from a year earlier.

Overall, lenders issued $1.06 trillion worth of mortgages in the fourth quarter of 2021. That was down quarterly by 9% and annually by 7%. Both decreases in the dollar volume of loans were the largest since the early part of 2019.

Home-equity lending also dropped quarterly, by 5%, to about 230,700, although that number represented a slight increase in the total portion of all loans.

The decrease in all three mortgage categories during the fourth quarter, as well as the third straight drop in total lending, represented another sign that the near-tripling of lending activity from 2019 through 2021 has ended, at least temporarily. The latest numbers likely reflect several trends coming together at the same time. They include homeowner appetite for refinance loans finally getting satisfied and mortgage rates ticking upward. In addition, a tight supply of homes for sale throughout the Coronavirus pandemic has helped drive prices up but purchases down, the report said.

"The receding volume of business for the residential mortgage industry is now showing up across all major categories of loans and appears to be more than just a temporary slide. The ebbing wave of refinance loan that started in early 2021 has fully spread to home-purchase and home-equity lending," Todd Teta, chief product officer at ATTOM, said. "No doubt, total lending levels are still up over normal amounts over the past decade. And the drop-off in purchase loans seems to flow from a lack of housing supply rather than the housing market boom ending. But declining business for lenders remains a key point to watch in assessing the state of the market, especially with interest rates likely to climb this year."

Refinance applications declined below 50% for the first time since June 2019, according to the weekly survey by the by the Mortgage Bankers Association.

Mortgage applications also decreased. The survey for the week ending Feb. 25, showed applications falling by 0.7% on a seasonally adjusted basis.

"Mortgage rates last week reached multi-year highs, putting a damper on applications activity. The 30-year fixed rate reached its highest level since 2019 at 4.15 percent, and the refinance share of applications dipped below 50 percent. Although there was an increase in government refinance applications, higher rates continue to push potential refinance borrowers out of the market," Joel Kan, MBA's associate vice president of Economic and Industry Forecasting, said. "Purchase activity remained weak, but the average loan size increased again, which indicates that home-price growth remains strong, and a greater share of the activity is occurring at the higher end of the market."

Kan said the MBA will continue to assess the potential impact on mortgage demand from the sharp drop in interest rates this week due to the invasion of Ukraine.