Redfin: Homes Linger On Market As Buyers Take Their Time 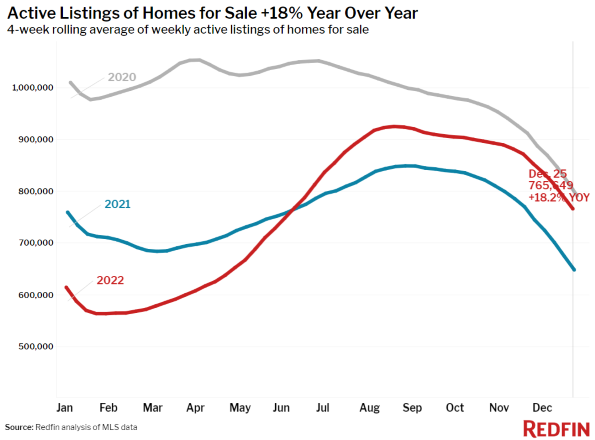 The number of homes for sale spiked 18% from a year earlier during the four weeks ended Dec. 25, 2022 the biggest increase since at least 2015, according to a report from Redfin.

The technology-powered brokerage said inventory has increased even though new listings are down by double digits because homes are taking a long time to sell amid 6%-plus mortgage rates — the average 30-year rate ticked up to 6.42% this week — economic uncertainty, and the typically slow holiday sales season.

Some buyers are returning to the market, because they can take their time searching. Redfin’s Homebuyer Demand Index — a measure of requests for tours and other Redfin buying services — is up 14% from its October low, the company said. Still, Redfin said it doesn’t expect sales to increase until well into January.

"This week's mortgage-rate pop can be chocked up to a handful of factors, but the week between Christmas and New Years is typically the slowest of the year for pending sales," said Redfin Deputy Chief Economist Taylor Marr. "We'll know more about the direction of rates and whether the recent uptick in early-stage demand will translate into sales when we're settled into the new year."

Home-sale prices fell year over year in 17 of the 50 most populous U.S. metros during the four weeks ending Dec. 25.