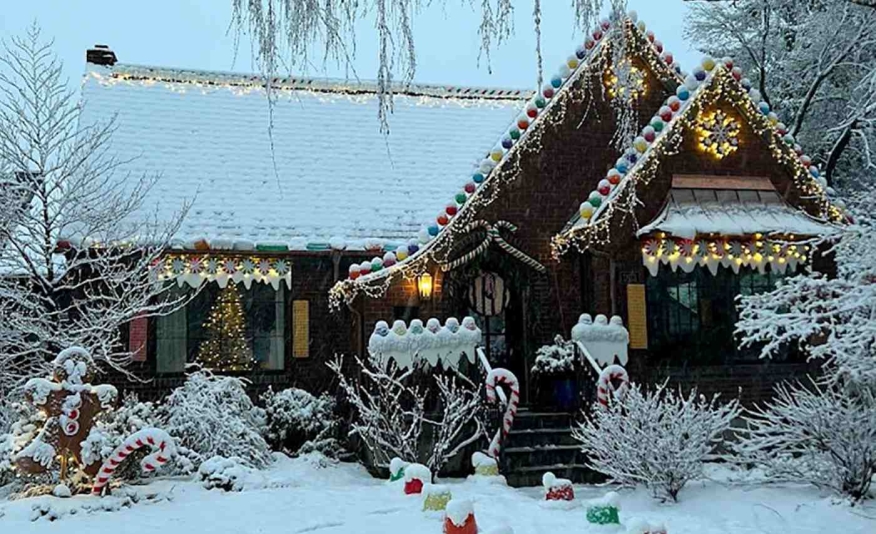 The home is adorned with giant gumdrops, peppermint swirls, candy canes, fudge-striped cookies, and even a gingerbread man.

In Salt Lake City, Utah, snow is falling and homes are decorated spectacularly for the holiday, although none quite as attention-grabbing as Virginia Hoffman’s life-size gingerbread house.

The home is adorned with giant gumdrops, peppermint swirls, candy canes, fudge-striped cookies, and even a gingerbread man. “It’s all been kind of figure it out as you go,” Hoffman said in an interview with Fox 13 News.

Hoffman told reporters that just a few years ago she realized her red brick, near-century-old, Tudor-style home could become a real life gingerbread house with just a few additions. At first Hoffman thought to herself, ‘How can I do that? How can I turn this house into a gingerbread house?’

So far, Hoffman’s gingerbread home has been able to withstand Salt Lake’s wintery weather. As the home is partially covered under a blanket of snow, it still looks edible enough to eat, Fox reporters confirm.

“I started with these gumballs and told my family about it – luckily they didn’t think I was crazy – and we started painting gumballs in the kitchen during Thanksgiving in 2019. Then my daughter and son-in-law helped me figure out how to attach it to the roof,” Hoffman said.

“If I’m too stressed from work and can’t sleep, what I would do is just lay in my bed and think ‘What would be the next good addition?’ and it would just be a distraction.”

As an interior designer, Hoffman was able to tackle one project after another in “satisfying labor of love,” which she said “consumed hundreds and hundreds of hours.” Although she did receive some help from her husband who is a professional artist.

This year’s new addition to Hoffman’s home were vanilla wafers. “We made that out of foam for insulation and then my husband melted out the squares with a soldering iron,” she said. “Then, I painted them with the exact right colors to look like the cookies.”

The home has delighted every person who happens to drive by, as well as thousands of other people online who liked and commented under a Reddit post of the house, shared by her daughter.

“I hope that if it can put a smile on anyone’s face, if it can just help a little bit… that’s the whole goal and it’ll all be worth it,” Hoffman said.