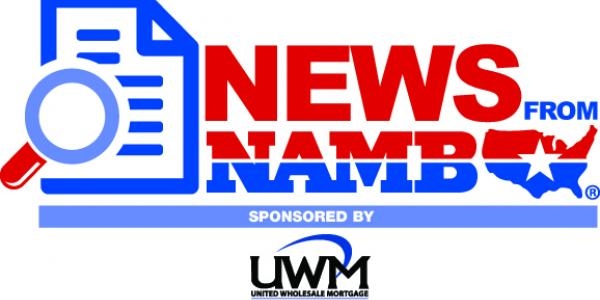 United Wholesale (Advertisement)
Unlike some lenders that treat your past clients as their own leads, UWM gives your business back to you. UConnect automatically monitors mortgage credit pulls. And if one of your past clients is in the market for a purchase or refinance, UWM notifies you immediately and sends a message to your client reminding them that you assisted them before—so you can retain the business. Learn more at uwm.com. Isn’t it time you started working with UWM?

NAMB Leg Conference Discount Ends Tomorrow!
Registration for NAMB’s Legislative Conference goes up to $249 after Friday the 5th, so register now. Last year’s event was Wow with congressional leaders, Ed Golding of HUD, top people at VA, and many other great speakers. We made over 200 visits to congressional offices. This is the year we could actually see major headway with some great legislation already introduced. We just need co-sponsors. The hotel this year is the best we have had, brand new, on the mall, free breakfast, and reasonably-priced. Check out the view above! Make your congressional appointments now. The conference begins April 9th and ends April 12th.

House Passes FHA/USDA Reform Legislation
A bill that would make FHA’s condo certifications less burdensome passed the House this week. The bill also allows the USDA Rural Housing Program to delegate approval authority to selected lenders. It appears to have White House and bipartisan support so it may actually make it into law.  If you just want the highlights you can read the GOP synopsis.

Wells Fargo Settles FHA Claims for $1.2 Billion
Wells tried every legal maneuver under the book to escape what other FHA lenders settled on earlier. However, Wells lost at every turn and decided to settle for $1.2 billion. Like the others, Wells was accused of reckless disregard for FHA underwriting guidelines that caused massive losses to FHA. In addition, a senior Wells vice-president, Kurt Lofrano, was named in the suit for failing to self-report. It was not clear if the settlement applied to Lofrano. But a letter filed later on Wednesday by government lawyers said the deal resolves "all claims in this matter."

Fannie/Freddie to Allow Independent Arbitrators in Buyback Requests
FHFA had promised they were going to allow third-party arbitrators to resolve disputes between lenders and the GSEs when internal appeals fail to reach an agreement. That has now been formally implemented. It will not apply to past loans, only those delivered after January 1st, 2016.

Mortgage Originator Opportunities Are Huge!
Mat Ishbia of UWM points out in his latest video there is no excuse for you not making a lot of money as a mortgage originator. Realtors are looking for originators who can close TRID loans quickly. They will even consider a new favorite LO if they can deliver. Even if Realtors aren’t your cup of tea there are five million homeowners who should be refinancing and that doesn’t even include the ones who want cash-out or a shorter or longer term.

FHA at 100+ LTV with 50+ ratios?
Tucked away in Senate energy bill S.2012 is a provision that would allow borrowers to exceed 100% LTV if the home has energy efficient improvements, they would be added to the value. The DTI would also be tweaked up to account for energy savings. The Cato Institute is not pleased, but you can bet it will sell homes since most homes have energy efficient features now.

A Powerful Argument for Pure Mortgage Brokerage
My friend Andy Harris is firmly convinced every other origination channel is inferior to pure mortgage brokerage. Andy points out that only a broker can offer the full range of products. Brokers work for the borrower, not the lender. Brokers have no corporate culture to fight. Wholesale lenders must compete for their business rather than dictate how the originator operates. Andy says calling yourself a “banker” when you are a non-bank is kind of like selling snake oil. Even if you don’t agree, it’s an interesting read.

CFPB Warns Credit Reporters to Report Accurately
In a letter to the 25 largest banks, CFPB Director Cordray warned that those reporting information to credit bureaus should have written policies and procedures that prevent inaccurate information from being reported. What Cordray really needs to get serious about is collectors providing information that is either inaccurate or that is reported in a way that doesn’t accurately reflect the dates, status, or spans of a collection. This is particularly true of medical collectors.

NAMB East is Just a Month Away!
A large percentage of attendees will walk away with a big prize at NAMB East. There are so many prizes that hundreds of people will get prizes like Surface 3s, I-Pads, GoPro cameras, TVs, Drones, to name just a few of the prizes being given away at NAMB East!  Mark your calendars for Wednesday, March 9, 2016 to Friday, March 11, 2016, for the biggest mortgage conference east of the Mississippi. All of the major wholesale lenders are exhibiting in the sold-out exhibit hall. Meet industry leaders, motivational speakers, and top producers who will show you how to increase production. World-class golf, top entertainers, at Hilton Head’s finest resort. It’s right on the ocean with average temperatures of 65 to 70 degrees.

NJ Proposes Law To Prosecute Fraudulent Borrowers
Most of the activity in mortgage fraud centered around mortgage originators and mortgage companies committing fraud. New Jersey wants to make it a separate crime for a borrower or anyone else that commits fraud in a mortgage transaction. Can you imagine how many people in New Jersey they could have locked up for stated income loans if this law had been in place?

Borrowers Want Cash From Their Homes
According to Black Knight, homeowners took $64 billion in cash from their homes last year, marking six consecutive quarters of rising cash-out refi volumes. In Q3 2015, 42 percent of all first lien refinances involved cash-out, the highest share since 2008. The average cash taken was $60,000. Even so, homeowners have tapped less than 2% of the available equity.

CFPB Employee Sues Over Disparate Pay
Florine Williams, is suing her employer, the CFPB, in D.C. federal court. Williams was given a starting salary of $150,000 per year in 2013, which she says was $24,000 less than her male counterpart at the time.  Williams says in the suit she was given raises last year and again earlier this month which brings her salary to $162,000. She claims her male counterpart's salary has increased to $198,000 per year.  Guess what her job is?  She is an equal employment specialist at the CFPB.

Nevada Super HOA Lien Law Revision No Help at All
Nevada law was so screwed up that HOAs were wiping out first mortgages for a lien of a few hundred dollars. It had become something of a racket for HOAs to extort money from lenders for fees or they could own a property for next to nothing. Nevada was at risk of becoming a pariah to mortgage lenders. So, the Nevada legislature “fixed” it.  Now, the lender has 60 days from the HOA foreclosure to redeem the property. The reason this is a worthless fix is that the process must be completed within the 60 days. The notice of the foreclosure may still not give enough time. Worse yet, HOAs don’t have to perform timely to give needed information to the lender trying to redeem, especially if they can make a killing if the lender doesn’t redeem. I can see lenders refusing to loan on properties with HOAs in Nevada.

Nationstar is Betting Consumers Didn’t Like Their Name
Nationstar mortgage is likely changing its public name to “Mr. Cooper.” Making the name sound more like a person rather than a big corporation is believed to make people more likely to do business with them. You might expect Mr. Cooper to be a friendly guy that you can talk to. We’ll see if that works when things still run like Nationstar. Funny how we think labels can change what should have been fixed in the first place.

Rate Outlook
The stock and bond markets have the jitters.  Every single word is examined and sends the markets up or down. Stanley Fisher, Fed vice-chair, spoke this week and bonds took it to mean there would be increased inflation. It really sounded more or less like wishful thinking on his part. He did seem to allay fears that there will be many, or even any, Fed rate hikes this year.  The global economy looks pretty glum at the moment. At least I can fill my car with gas for $20 when it used to cost me $60. We all like those nice refis that lower rates have triggered.

Things are so week in Japan that their central bank has cut its rate into negative territory. Europe is promising the same. Wouldn’t that be fun if mortgages went that way? Could you imagine the government paying you to take out a mortgage? It must make Janet Yellen worry that she is moving in the opposite direction from the rest of the world.

All eyes are on the stock market these days to see if it can hold steady in the face of ever-worsening economic conditions abroad. So far this week, the market refuses to close below 16,000 and has even gained a little ground.

Stocks seem to be the only thing keeping rates from dropping more. Most of the economic news this week hasn’t been that good. Income was the only good news, if you like inflation, up .3%. But the PCE, the measure of real wages that the Fed watches, was unchanged as was the total outlay for wages.

ADP says we created 205,000 new jobs, but today, new jobless claims came in at 285,000. Productivity was down 3% and Factory Orders fell 2.9%. Not exactly a rosy picture but good for rates overall.

Tomorrow, the most watched economic news of the month, the Bureau of Labor Statistics Jobs Report comes out. The last few jobs reports were showing strong job growth. That may bounce a little unless things like 80,000 seasonal jobs at Home Depot spike things. Those are hardly the kind of jobs that help buy houses though.