Inlanta Mortgage Marks Anniversary With $25,000 Gift to Pets for Vets 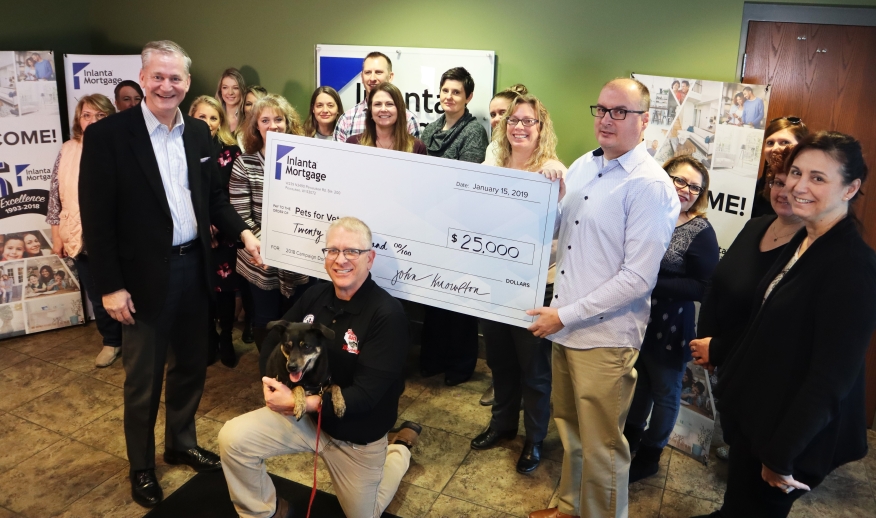 Inlanta Mortgage Inc. announced its 2018 charity partnership with Pets for Vets earned $25,000 for the charity that helps pair rescue dogs with at-risk returning veterans. As part of its 25th anniversary celebration that kicked off in September, Inlanta selected Pets for Vets as the beneficiary of its annual charity partnership.
“Going into our 25th anniversary, we knew we wanted to celebrate by giving back in a big way,” said Paul Buege, Inlanta’s President and Chief Operating Officer. “Because our founder and chairman of the board John Knowlton is a devoted supporter of rescue dogs, and as an organization that is committed to supporting our veterans, we knew this organization that blends these two would have deep meaning for our clients, referral partners and our awesome team of employees.”
In June, Inlanta announced that it would make a donation for every loan closed through the end of the year. In addition, the company held various employee fundraisers both in the home office and branch offices, including its annual charity raffle held during its National Conference in September. The proceeds from the campaign were presented to Dan Zealley, Executive Director for the Milwaukee, Wis., area chapter of Pets for Vets.
"The donation from Inlanta Mortgage and its customers will go a long way to helping both veterans and shelter dogs to get a second chance,” said Zealley. “These companion animals assist in the healing our service members.  Thank you to all of our veterans!"
Link copied
Published
Jan 18, 2019
Coming Up See All
Sep
28
DealDesk: Introduction to Acra Lending's Light Doc Programs
Webinar
2:00 PM ET
Sep
29
How to Win with Non-Delegated Correspondent - Key Insights on the Model and Fulfillment Solutions
Webinar
2:00 PM ET
Oct
06
How to Use Credit as A Strategic Tool to Attract More Leads, Make Better Offers and Close More Loans
Webinar
2:00 PM ET
Get the Daily
Advertisement
Advertisement
Analysis and Data
New-Home Sales Explode In August