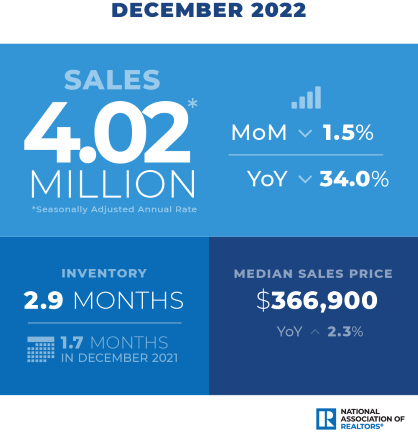 Sales of existing homes fell for the 11th consecutive month in December, according to a report released Friday by the National Association of Realtors (NAR).

Three of the four major U.S. regions reported month-over-month drops, while sales in the West were unchanged, the NAR said. All regions experienced year-over-year declines.

Total existing-home sales — completed transactions that include single-family homes, townhomes, condominiums, and co-ops — decreased 1.5% from November to a seasonally adjusted annual rate of 4.02 million in December. Year-over-year, sales fell 34%, down from 6.09 million in December 2021.

The median existing-home price for all housing types in December was $366,900, up 2.3% from $358,800 a year earlier, as prices increased in all regions. It marked 130 consecutive months — or 10 years and 10 months — of year-over-year increases, the longest streak on record.

“Home prices nationwide are still positive, though mildly,” Yun said. “Markets in roughly half of the country are likely to offer potential buyers discounted prices compared to last year.”

“Cash buyers are unaffected by fluctuations in mortgage rates and were able to take advantage of lower prices in some areas,” Yun said.

Individual investors or second-home buyers, who make up many cash sales, purchased 16% of homes in December, up from 14% in November but down from 17% in December 2021.

Distressed sales — foreclosures and short sales — represented 1% of sales in December, virtually unchanged from last month and a year earlier.

Existing condominium and co-op sales were recorded at a seasonally adjusted annual rate of 420,000 units in December, down 4.5% from November and 38.2% from a year ago. The median existing condo price was $317,200 in December, an annual increase of 3.3%.