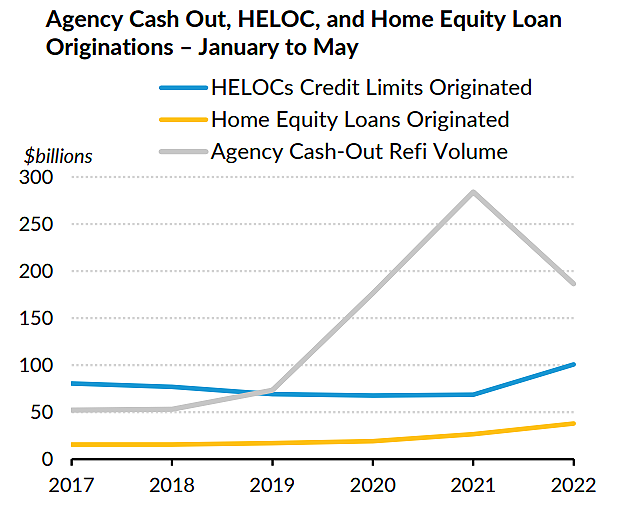 As refinancing mortgages and cash-out refis continue to dwindle amid rising mortgage rates, homeowners with mortgages are turning to another source for cash: Home equity lines of credit (HELOCs).

According to “Housing Finance at a Glance: A Monthly Chartbook” for August 2022 published by the Urban Institute’s Housing Policy Finance Center, the volume of HELOC credit limit and home equity loan originations jumped nearly 50% through the first five months of this year as compared to a year earlier.

According to the report, HELOC credit limits increased by 46.9% from January to May 2022 as compared to the same period last year. Originations totaled $100.8 billion this year compared to $68.6 billion a year earlier.

The levels for both HELOC credit limits and home equity loans are the highest since at least 2011, the report said.

The report said borrowers took advantage of generationally low mortgage rates to reduce their monthly payments, and mortgage originator profitability skyrocketed because of the volume.

That has all changed, however, thanks to higher mortgage rates. The Mortgage Bankers Association reported Wednesday that the 30-year fixed mortgage rate for a conventional loan is now 6.01%, the first time it has risen above 6% since 2008.

The higher rates resulted in a sharp cutback in cash-out refinances, which had soared over the past two years as homeowners used the opportunity to extract equity as it increased along with home prices. According to the report, the combined cash-out refinance volume for all federal agency loans (Fannie Mae, Freddie Mac, FHA, and Veterans Affairs) peaked around $66 billion per month in March 2021. By June 2022, that had fallen by more than 76% to $15.7 billion, the report said.

The report notes that HELOCs and home equity loans differ from cash-out refinances in two ways. First, they are nonagency products typically held on bank portfolios or sold in private securitizations. Cash-out refis, on the other hand, are generally federally backed by Fannie, Freddie, FHA and VA.

Second, HELOCs and home-equity loans tend to have higher credit score requirements and more stringent underwriting compared to cash-out refinances. HELOCs, in particular, require excellent credit — about 45% of HELOC originations so far this year had credit scores over 780, the report said.

The report said that cash-out refinance volumes are likely to remain muted for the foreseeable future, because most borrowers will continue to be reluctant to give up the ultra-low rates on their existing mortgages.

“This suggests that demand for HELOCs and home equity loans will remain strong, especially given the (housing) supply shortage and substantial equity build-up for existing homeowners,” the report said. “We would also expect home equity credit availability to improve as mortgage lenders look for ways to approve more borrowers to keep volumes flowing.”

The report adds that credit scores for agency loan originations have already begun to fall since the rise in mortgage rates began.

“While they are unlikely to be full substitutes for cash-out refinances, HELOCs and home equity lending volumes seem poised to grow in the near future,” the report said.

Home Equity
Aug 02, 2022
The Future Of The Cash-Out Refinance Market

Education needed for clients on benefits of HELOCs