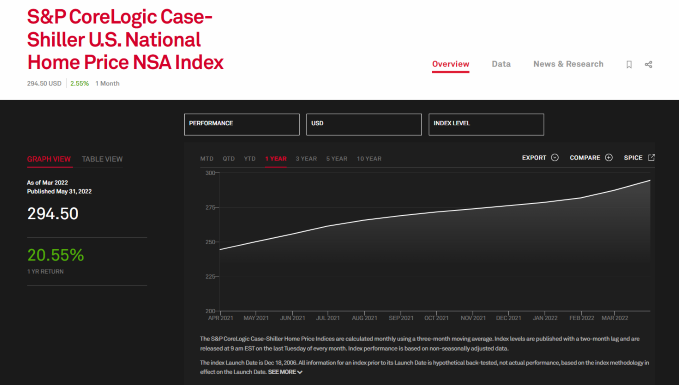 "Those of us who have been anticipating a deceleration in the growth rate of U.S. home prices will have to wait at least a month longer," said Craig J. Lazzara, managing director at S&P DJI.

"For both the National and 20-City Composites, March's reading was the highest year-over-year price change in more than 35 years of data, with the 10-City growth rate at the 99th percentile of its own history,” Lazzara said.

"For the first time in nearly three years, the city with the most rapid growth in housing prices was not Phoenix,” Lazzara said. “In March, Tampa led all cities with a gain of 34.8%, with Phoenix (32.4%) and Miami (32%) taking silver and bronze honors. As was the case last month, prices were strongest in the South (+29.8%) and Southeast (+29.6%), with every region continuing to show impressive gains.”

Before adjusting for seasonal factors, the U.S. National Index also posted a 2.6% month-over-month increase in March, while the 10-City and 20-City Composites posted increases of 2.8% and 3.1%, respectively, the report said.

After seasonal adjustment, the U.S. National Index posted a month-over-month increase of 2.1%, and the 10-City and 20-City Composites posted increases of 2.2% and 2.4%, respectively.

In March, all 20 cities reported increases before and after seasonal adjustments.

Lazzara said the strength of the composite indices suggests broad strength in the housing market. “All 20 cities saw double-digit price increases for the 12 months ended in March, and price growth in 17 cities accelerated relative to February's report,” he said. “March's price increase ranked in the top quintile of historical experience for every city, and in the top decile for 19 of them.”

He added that, as mortgages become more expensive due to the Federal Reserve’s efforts to curb inflation, the surge in home prices may be nearing an end.

“Although one can safely predict that price gains will begin to decelerate,” he said. “the timing of the deceleration is a more difficult call.”