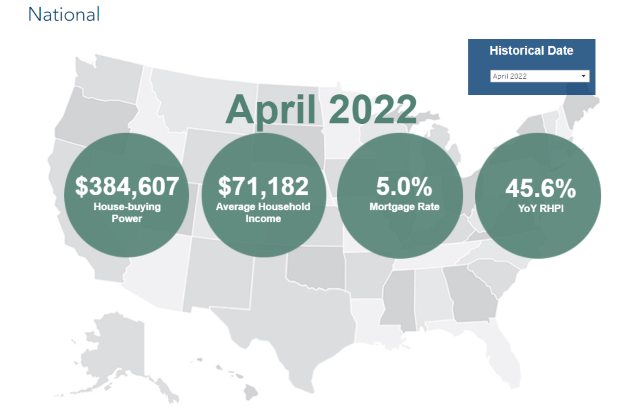 That's the latest finding in the April 2022 RHPI, released today by First American Financial Corp. The Index measures the price changes of single-family properties throughout the U.S. adjusted for impact of income and interest rate changes on consumer house-buying power over time at national, state, and metropolitan levels. Because the RHPI adjusts for house buying power, it also serves as a measure of housing affordability.

“This rapid annual decline in affordability was driven by two factors,” First American Chief Economist Fleming said of the 45.6% increase in prices. “A 21.2% annual increase in nominal house prices, and a 1.9 percentage point increase in the average 30-year, fixed mortgage rate compared with one year ago.”

Homebuyers have only a few options to mitigate the loss of affordability caused by the increase in mortgage rates and home prices. One way is to increase household income equivalent or greater than the amount home prices have increased. Household income increased 5% from April 2021 and slightly boosted consumer house-buying power, but even this strong year-over-year income growth was not enough to offset the affordability loss from higher rates and fast-rising nominal prices.

Another option for homebuyers is to switch to an adjustable-rate mortgage (ARM) with a lower rate than the fixed-rate benchmark. Overall, the share of ARMs relative to fixed-rate mortgages has grown as mortgage rates have increased in recent months.

“In April, affordability on both a year-over-year and month-over-month basis declined at its fastest pace in the series’ history,” Fleming said. “However, real estate is local and house-buying power and nominal house prices vary by city, so it’s helpful to know where affordability is declining the most and the least.”

Where Affordability Declined The Most Year-Over-Year

Strong investor activity and net-in migration in Charlotte increased demand for homes against a limited supply of homes for sale. The second-greatest year-over-year decline in affordability occurred in Tampa, Fla., but was driven by annual nominal house price growth of 37%, which is a greater increase in house prices than Charlotte.

“Comparing the decline in affordability in Charlotte with Tampa illustrates the importance of shifts in household income," Fleming said. "While annual house-price appreciation in Tampa outpaced that of Charlotte, the decline in affordability was tempered by growth in household income. Ultimately, the common dynamic across all 50 markets tracked in the RHPI is that nominal house-price appreciation outpaced house-buying power."

Where Affordability Declined the Least

“Housing affordability is rapidly declining, and our preliminary nominal house price index estimates for May and June indicate that house-price growth is already moderating as potential buyers are pulling back from the market,” Fleming said.

He continued, “The pandemic-driven supply-and-demand imbalance that fueled historically strong house-price appreciation is coming to an end as the housing market rebalances to a new normal. Yet, the rebalancing will differ from city to city based on localized shifts in supply and demand and income levels.”

Other highlights from the RHPI: