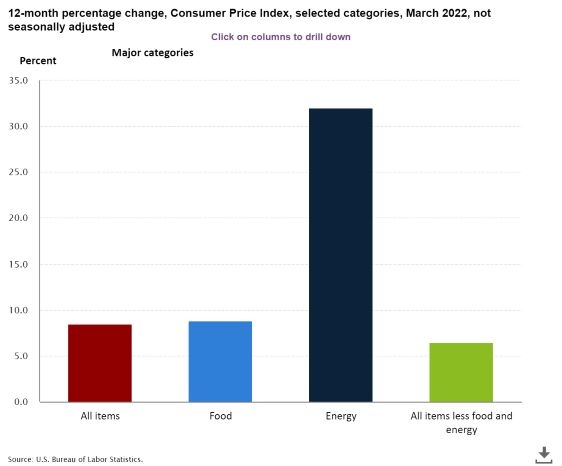 Increases in energy, food, and shelter costs drove the increases.

There’s no way to sugarcoat it: Inflation continued to surge in March, with the Consumer Price Index (CPI) up 8.5% from a year earlier, the largest increase in more than 40 years.

In fact, choose just about any item in the index, and it posted a year-over-year increase not seen in at least four decades.

The latest report from the U.S. Department of Labor’s Bureau of Labor Statistics (BLS) shows the CPI increased 1.2% in March on a seasonally adjusted basis, after rising 0.8% in February. Year over year, however, the 8.5% increase in the all items index in March, not adjusted for seasonal variations, is the largest 12-month increase since the period ending in December 1981, the report states.

It is the sixth straight month that the annual inflation rate has been above 6%; in February, it was 7.9%.

Increases in the indexes for gasoline, shelter, and food were the largest contributors to the seasonally adjusted all items increase. The gasoline index rose 18.3% in March and accounted for over half of the all items monthly increase; other energy component indexes also increased. The food index rose 1% and the food at home index rose 1.5%. The shelter index rose 0.5%.

The energy index rose 11% in March from February, following a 3.5% monthly increase in February. The gasoline index rose sharply in March, increasing 18.3% after rising 6.6% in February. (Before seasonal adjustment, gasoline prices rose 19.8% in March.) The index for electricity increased 2.2% in March, while the index for natural gas rose 0.6% over the month.

The energy index rose 32% over the past 12 months, with all major energy component indexes increasing. The index for gasoline rose 48% over the last year, and the index for natural gas rose 21.6%. The index for electricity rose 11.1% for the 12 months ending March.

The index for all items less food and energy rose 0.3%  in March. The shelter index increased 0.5% in March and accounted for nearly two thirds of the monthly increase in the all items less food and energy index. The rent index increased 0.4% in March, as did the owners’ equivalent rent index. The index for lodging away from home rose 3.3% over the month, after rising 2.2 percent in February.

Lawrence Yun, National Association of Realtors chief economist, said, “Aggressive inflation will force the Federal Reserve to raise interest rates multiple rounds this year and actively pursue quantitative tightening. That is why mortgage rates have shot up so high. Higher mortgage rates will inevitably pull home sales down in the coming months and slow home price appreciation. My projection at the moment is for a 10% reduction in home sales this year and a 5% home price gain by the year’s end.”