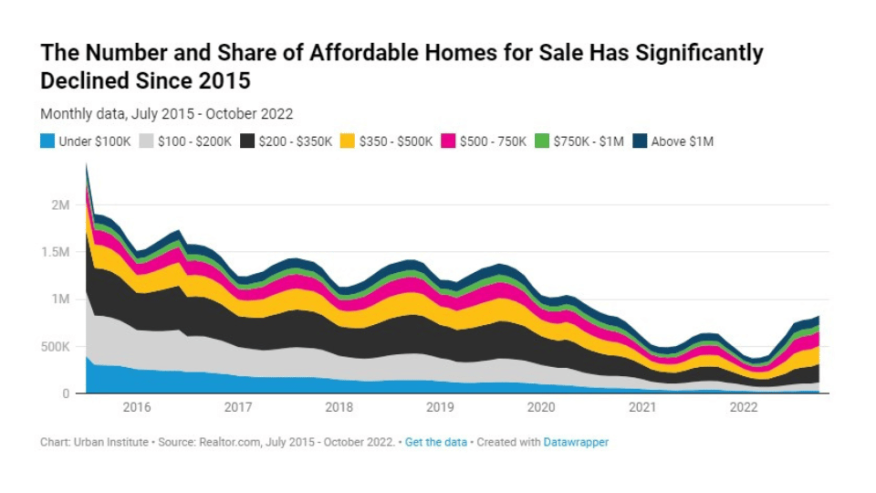 The real estate market is always a bit sluggish during the winter months, which typically means homebuyers can get a better deal — those who close in January pay an average of 0.51% less than those who close during other months.

But given the current market, homebuyers won’t be able to catch a break this season.

A study by the Urban Institute says 80% of homes on the market aren’t affordable for households earning median incomes or less. Buyers at those income levels can afford only 20% of homes on the market, compared to 50% in 2016. Affordability varies by location, however, suggesting that a combination of federal and local solutions that target supply and demand could alleviate cost burdens.

The reason home prices remain elevated is largely due to the declining number of active listings nationwide, falling from 2.5 million in July 2015 to roughly 830,000 in October 2022, a 66.2% drop.

Rents have also risen substantially in the past year, but the dramatic rise in interest rates has made owning more expensive than renting. The median mortgage-payment-to-rent ratio-payment reached 1.46 in September, the highest since the Mortgage Bankers Association (MBA) began to track this metric in 2009.

Although affordability decreased in most markets, there is a notable variation. For example, households earning median income or less in the Detroit area can afford 46% of homes on the market, while in Los Angeles, they can afford less than 2%.

Generally, areas with higher ratios of median home sales prices to median household incomes have lower shares of affordable homes that households with median incomes or less can purchase. 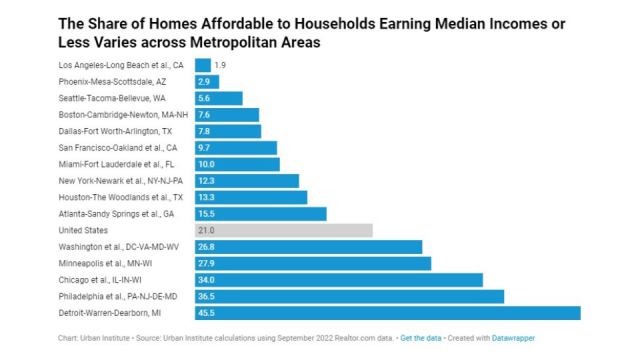 As homes become more pricey, households with lower incomes — who are disproportionately households of color and young first-time homebuyers — will face greater challenges accessing homeownership. Interventions on the housing supply and demand sides are essential to controlling the widening wealth disparities by income, race, ethnicity, and generation.

The study suggests that local policymakers could consider changing zoning ordinances to lower housing costs. Federal policymakers could consider incentives for such local zoning changes, it said. They could also consider incentives for the Housing Trust Fund and Capital Magnet Fund to preserve and increase homeownership for families with low incomes and consider expanding the Low Income Housing Tax Credit program to rehabilitate homes for sale.

Policies like down payment assistance programs assistance to first-generation homebuyers, and special purpose credit programs in areas where there are still affordable homes, like Detroit and Philadelphia, could be more effective in helping struggling homebuyers, the institute states. Also, programs that reduce borrowing costs in addition to the amount borrowed could help improve the economic environment, it said.

The Urban Institute contends that as long as home prices and inflation remain volatile, enacting complementary policies that alleviate supply and demand challenges will be critical for ensuring prospective buyers with median and low incomes don’t get boxed out.