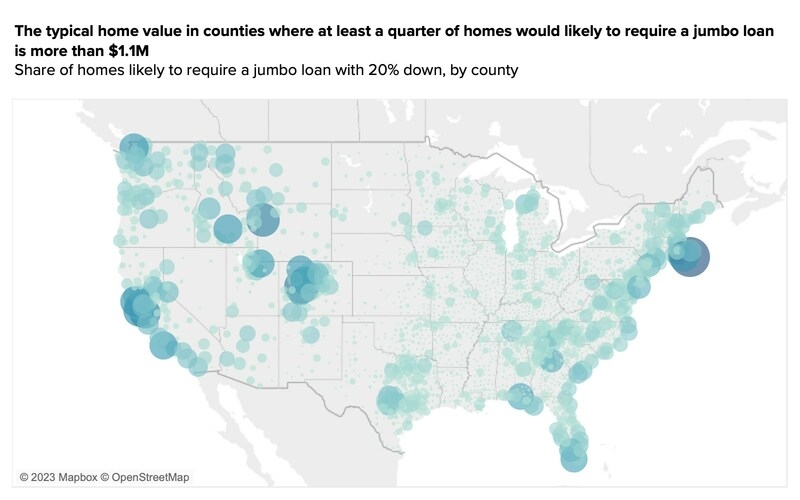 More than 2 million homes nationwide no longer require a jumbo loan, giving homebuyers additional inventory that is covered by a more accessible financing option, according to a new analysis by Zillow Home Loans.

The change is due to the Federal Housing Finance Agency's (FHFA) recent increase of conforming loan limits to $1,089,300 in some high-cost markets.

Zillow said the change may be welcome for buyers looking to purchase a home in the coming shopping season, as jumbo loans often come with additional fees and more stringent qualification standards, making them less affordable for many buyers.

Compared to conforming loans, jumbo loans typically require a higher credit score — 700 is the minimum score many lenders accept for such loans, versus a score of 620 that many require for a conforming loan.

Bigger down payments are also the norm with a jumbo loan:

These high-cost counties are largely concentrated in the nation's most expensive metro areas, along the coasts and in the Mountain West.

While home price appreciation has begun to plateau, home prices are still significantly higher than a year ago. Affordability challenges weighed heavily on home sales in the second half of 2022 — the number of listings pending in November fell by 16.5% from October and are down 38% compared to last November.

"The addition of 2 million homes that now qualify for conforming loan options across the county is welcome news for homebuyers entering a shopping season with fewer homes on the market," said Nicole Bachaud, Zillow Home Loans senior economist. "Home price appreciation has slowed significantly, and this means that homes nearing jumbo loan territory will stay eligible for conforming loans longer than we have seen in the last few years."