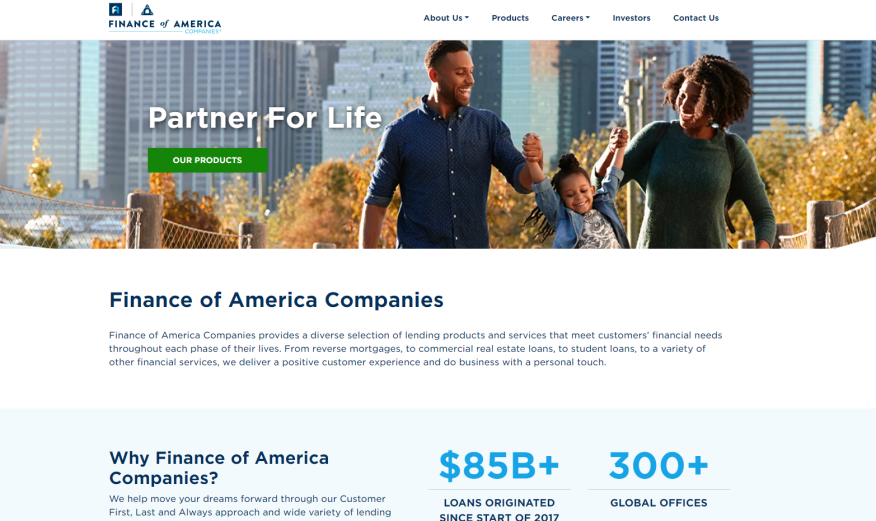 Expects to complete closing of its forward retail mortgage division by the end of 2022.

Finance of America Companies (FOA) reported its fourth consecutive quarterly loss on Wednesday as it works toward closing its forward mortgage origination business.

FOA’s last profitable quarter was the third quarter of 2021, when it posted net income of $50 million, or 22 cents per diluted share.

The company announced in October that it will close Finance of America Mortgage LLC, its retail mortgage division, as well as shut down its forward wholesale channel.

FOA said the mortgage originations segment generates revenue through fee income from loan originations and gain on sale of mortgage loans into the secondary market. The segment reported revenue of $61 million for the third quarter, down 41% from $103 million in the second quarter. The company said that reflects “the impact of lower volumes and competitive market dynamics impacting margins.”

FOA said its overall net loss is primarily non-cash. “It includes negative changes in fair value of long-term assets and liabilities of $116 million, and impairment of intangible and other long-lived assets of $138 million predominantly related to the Mortgage Originations segment, which will be discontinued,” it said.

Chief Financial Officer Johan Gericke said during a conference call with analysts that FOA expects costs related to the shutdown of FOA Mortgage to total between $145 million and $165 million, including $130 million to $138 million in noncash expenses. He added that $129 million of the overall shutdown costs were incurred during the third quarter.

FOA also expects to incur cash expenses totaling between $15 million and $26 million related to the shutdown, mostly in the form of severance payments and lease and vendor buyouts. Most of those expenses will be incurred in the fourth quarter, Gericke said.

President & Interim CEO Graham A. Fleming said closing the division was a decision company officials took “very seriously,” and that it should be completed by the end of the year. He added that the company is providing support for affected employees as they search for new jobs.

In deciding to close the retail mortgage division, Fleming said the company “determined that market conditions have fundamentally changed, and we need to change with them.”

He added that “the exit from mortgage will allow FOA to optimize our resources and prioritize high-growth businesses where we already hold distinct competitive advantages and leading positions in markets with positive macro tailwinds.”

FOA is a leader in offering reverse mortgage products, he said, and “has a history of product innovation,” adding that the company hopes to expand on that legacy.

The Reverse Originations segment generates revenue and earnings in the form of net origination gains and origination fees earned on the origination of reverse mortgage loans. The segment’s third-quarter revenue of $72 million was down 10% from the second quarter, primarily due to the impact of lower volumes and partially offset by improved margins, FOA said.

The company funded $1.14 billion in reverse mortgage volume in the quarter, down 28% from the second quarter. FOA said that was primarily due to “a strategic decision to reduce Correspondent aggregation. Despite the volume decline, we saw our seventh consecutive quarter of new-to-reverse growth in our proprietary HomeSafe product.”

The company also said the value of mortgage servicing rights was down 71% from the second quarter to $103 million due to “strategic sales of MSR during the quarter.” It added that FOA continues “to monitor our MSR balances to take advantage of opportunities that the market presents.”

IFOA reported $169 million in cash and cash equivalents on its balance sheet. While that was down 23% from the second quarter, that was due in part to the company paying down $56 million of secured debt in the third quarter.

Gericke, the CFO, said the company is looking ahead to 2023 and beyond. “We are bullish on the earning power of the organization,” he told analysts. “We will focus predominantly on our Reverse segment, where we see powerful macro tailwinds.”