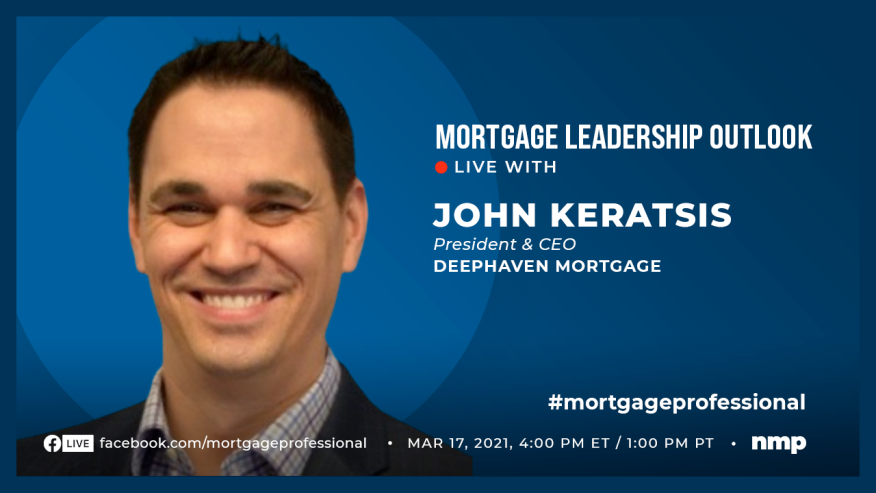 On Wednesday, March 17, the Mortgage Leadership Outlook will feature John Keratsis, president and CEO of Deephaven Mortgage. Keratsis will join series' host Andrew Berman, head of engagement and outreach for National Mortgage Professional Magazine, as they explore Keratsis' history as the founder of Boston National Title (acquired by Incenter, a Blackstone portfolio company), what excited him about the opportunity in Non-QM, what led him to leave title and settlement services to enter the lending side of the business, the outlook for Non-QM and more.

Keratsis recently joined Deephaven Mortgage in February. In his role, he is responsible for leading the next phase of Deephaven's strategic growth. Prior to joining Deephaven, Keratsis held the position of senior managing director at Incenter where his responsibilities included oversight of several mortgage services and specialty lending business units and over 800 employees. These units included Boston National Title, a nationwide title and settlement services platform; CampusDoor, a comprehensive, private student loan origination platform and fulfillment company; Agents National Title Insurance Company, a title insurance underwriter; a large-scale offshore mortgage fulfillment operation and a national appraisal management company. Prior to Incenter, Keratsis spent nearly 12 years as founder and CEO of Boston National Holdings which was acquired by Incenter in November 2016.